Home News Gary Neville has an opinion about absolutely everything, jokes Jurgen Klopp

Gary Neville has an opinion about absolutely everything, jokes Jurgen Klopp 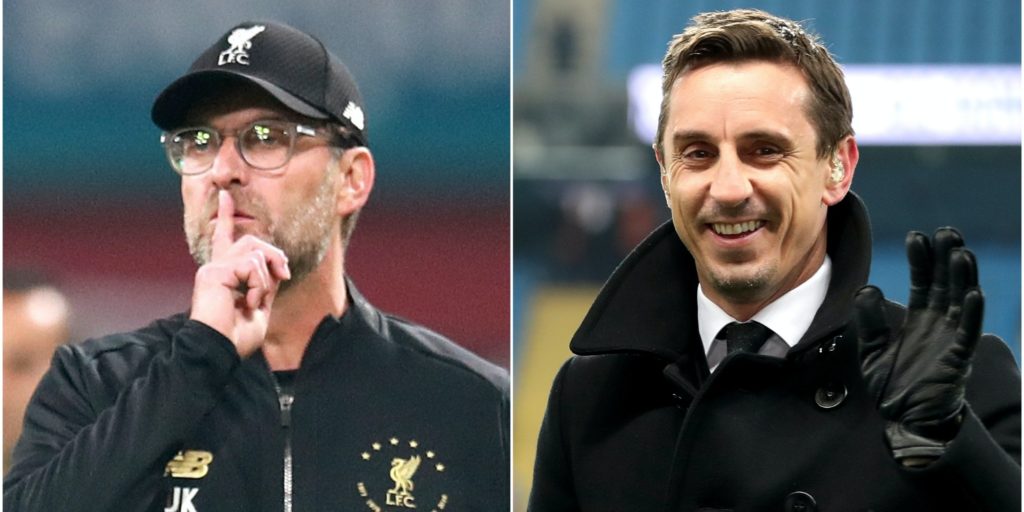 Liverpool manager had a tongue-in-cheek jibe at the former Manchester United defender, who now works as a TV pundit.

Liverpool manager Jurgen Klopp has joked the biggest lesson he has learned during lockdown is how opinionated Gary Neville is.

The former Manchester United defender has been outspoken on a range of topics during the coronavirus pandemic, in particular how the Premier League should restart, the affect on lower league clubs and the Government’s response to the crisis.

The German could not resist a jibe at the Sky Sports pundit when asked what he had learned during the lockdown.

“I didn’t learn a lot in lockdown, other than Gary Neville has an opinion about absolutely everything. It is incredible,” he said on Football Focus.

Klopp did also admit that being isolated has made him realise how connected society is and says he is missing the “boys” at Liverpool’s training ground.

“I didn’t learn a lot but I have known myself for 52 years and I knew I can deal with difficult situations before,” he added.

“This is a difficult situation, not only for me or my family but for every single person on the planet.

“I am quite proud how we as a society have dealt with it. We are not perfect, we will always make mistakes but I think we have learned how connected we are to each other.

“I miss the boys the most because we created a group where all the people at Melwood have a really, really good relationship and we became friends over the last four and a half years.

“We saw each other with Zoom and other calls but it is still not the same. Going back to Melwood and doing the things we usually do is something I really miss.”