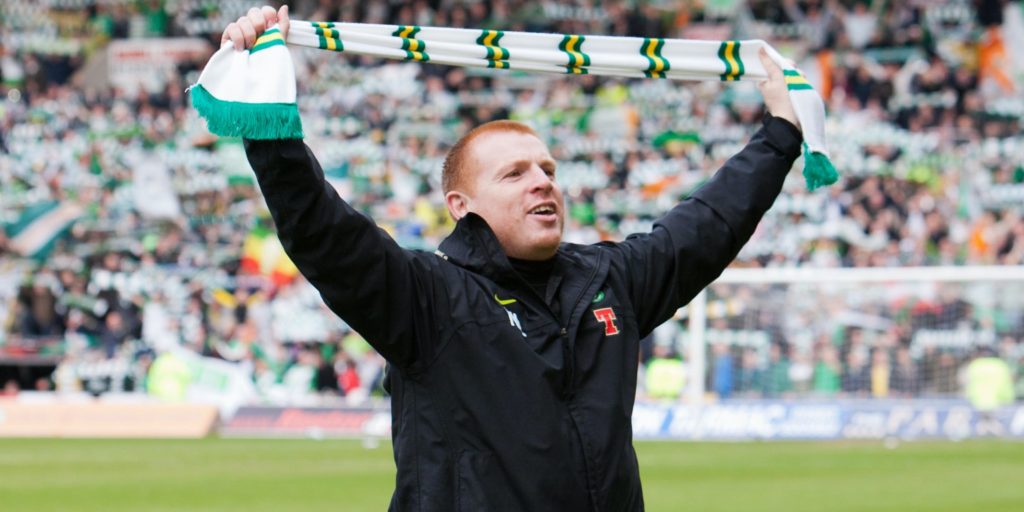 Celtic are set to be crowned champions if the SPFL board, as expected, declares Scotland’s top-flight season over in the coming days.

The board is expected to bring the Ladbrokes Premiership to a conclusion and focus on planning for Scottish football’s return from the coronavirus crisis.

The circumstances will be strange but Celtic will equal a Scottish record of nine consecutive title wins, first set by themselves in 1974 and matched by Rangers in 1997.

Here, we look at where and when the Hoops won their previous eight titles.

Celtic kicked off the run with current boss Neil Lennon at the helm as they stormed to a 6-0 win against Kilmarnock.

Nine-man Celtic had been denied a title party at Ibrox two weeks earlier when they suffered a 3-2 defeat against administration-hit Rangers.

But there was no slip-up at Rugby Park as Charlie Mulgrew scored twice and set up goals for Glenn Loovens and Gary Hooper before half-time.

Late goals from Joe Ledley and Hooper again rounded off a day of celebration as Celtic won the title for the first time since 2008.

Celtic retained their title with a commanding 4-1 win against Inverness at Celtic Park.

The Hoops went into the game only needing a point but they did not come to life until after a goalless first half when Hooper scored a double with a strike by stand-in skipper Ledley.

Substitute Georgios Samaras completed the scoring for Celtic with a virtuoso goal two minutes from time as Aaron Doran netted an even later consolation for the visitors.

Celtic made it three-in-a-row with an emphatic 5-1 win over Partick Thistle at Firhill.

An early header from Anthony Stokes came before 17-year-old substitute Liam Henderson opened his Celtic account in the 49th minute with a low drive from 12 yards.

Norwegian midfielder Stefan Johansen added a third and the visitors responded to losing a late goal to Jags substitute Christie Elliott by scoring another two through Stokes and Kris Commons.

Norwegian boss Ronny Deila took over from Lennon in the summer of 2015 and captured the flag at the first time of asking after Aberdeen lost 1–0 away against Dundee United at Tannadice, leaving Celtic 11 points clear with three games to play.

The Hoops did their bit on the previous night with a 5-0 dismantling of Dundee at Parkhead.

Midfielder Commons scored the third from the spot in the 71st minute then set up substitute James Forrest to make it 4-0, before midfielder Nir Bitton sealed the convincing win in style with a 30-yard thunderbolt.

Deila’s side survived an Aberdeen fightback to win 3-2 at Parkhead and clinch their fifth successive title.

The Hoops had a nine-point and 35-goal advantage over the Dons heading into the first of their final three games.

Patrick Roberts scored with a couple of cracking first-half strikes before right-back Mikael Lustig added a third just after the break. The Dons rallied with goals from Niall McGinn and Andrew Considine.

A Scott Sinclair hat-trick helped Celtic secure their sixth successive title in a commanding 5-0 win over Hearts at Tynecastle.

Midfielder Stuart Armstrong added a third with a drive and Roberts scored a wonderful fourth before Sinclair notched his third from the spot with seven minutes remaining. The Hoops went on to capture the domestic treble without losing a game.

Celtic clinched their seventh successive title in stunning style with a 5-0 thrashing of Rangers at Parkhead.

Odsonne Edouard scored a first-half double with James Forrest adding a third before the break.

Celtic moved 12 points clear of Rangers with three games left thanks to a 3-0 victory over Aberdeen.

James Wilson missed two glorious chances for the injury-ravaged home side before Hoops right-back Lustig scored with a diving header five minutes before the interval.

Jozo Simunovic headed home from a corner in the 52nd minute before Odsonne Edouard fired in a late third to clinch an eighth title in a row.