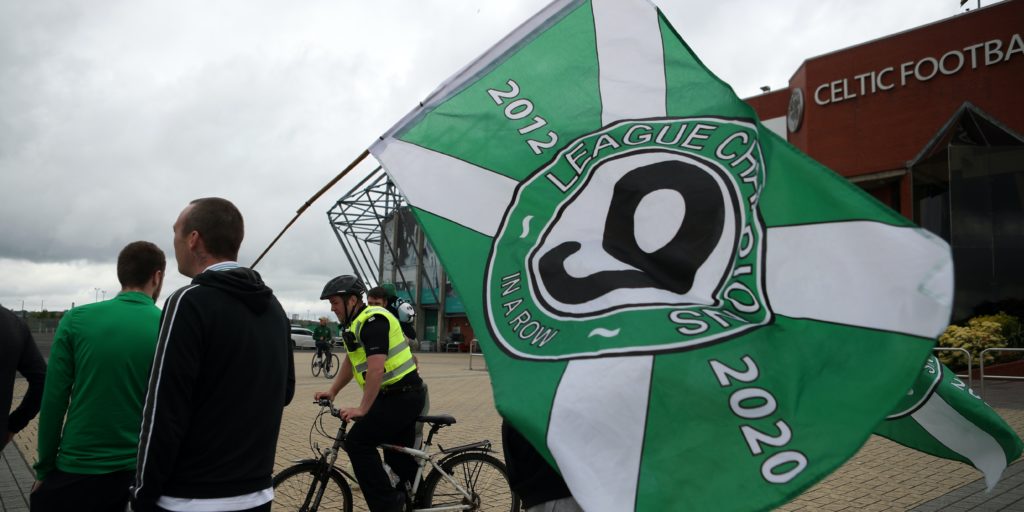 Celtic manager Neil Lennon insisted nothing could detract from their ninth consecutive title success after the Scottish Professional Football League board called time on the season.

The Hoops were declared champions while Hearts will be relegated unless their owner, Ann Budge, can come up with a reconstruction plan that will garner enough support.

Budge has threatened legal action if her attempts fail but the SPFL revealed Premiership clubs had unanimously agreed that the season could not be completed.

The league board had the authority to conclude the campaign on a points-per-game average following a club vote which ended the lower divisions last month and Celtic were clear winners.

Lennon’s men were 13 points ahead of Rangers, who had a game in hand, after claiming 11 points more than their rivals during 2020 before play was suspended amid the pandemic on March 13.

Lennon had insisted on that day that Celtic should be awarded the title if action could not resume and he will not accept any claims that their achievement is diminished in any way.

Celtic scored 89 goals in 30 matches, a higher total than they managed in four of the eight previous 38-game campaigns.

“We were desperate to continue the blistering form we were in when the season was suspended,” Lennon said on his club’s website.

“However, do not in any way let this detract from our achievement. While many will seek to challenge us, the title is ours and we deserve it. We are indeed champions for a reason.

“To be sitting here now as the manager of the nine-in-a-row, and having played a huge part in that, fills me with so much pride.”

Celtic chief executive Peter Lawwell added: “It is, of course, a real shame that we were not able to see out the league in front of our fans. However, no one can deny how deserved this title is.”

While Celtic’s healthy lead allowed the SPFL board leeway at the top, Hearts have vowed to fight their relegation after finishing four points adrift.

Budge is now working on a new reconstruction plan after a number of top-flight clubs appeared to have scuppered attempts to reach consensus.

Budge said in a statement: “It was previously indicated that league reconstruction would not generate enough support to pass a vote between member clubs. In recent days a number of positive talks have been held with both the SPFL and member clubs and this topic is currently being revisited.

“Hearts will shortly submit a member’s resolution that we believe is a pragmatic solution to the issues the game currently faces and a way forward that the clubs can unite behind. It is our belief that this resolution, if supported, will provide an opportunity to avoid disproportionately disadvantaging – financially and otherwise – any club.

“This is possibly the final chance for our game to stand together, protect each other and not only survive but flourish in the aftermath of this terrible pandemic. Players from across all leagues have shown a desire for reconstruction and having already received support from some clubs we are hopeful that this resolution can positively progress Scottish football.

“As previously intimated the club has been taking legal advice throughout this process and are continuing to do so. We hope that the resolution being prepared will avoid the need to go down this route. Legal action would be both time consuming and expensive. However the cost to the club of relegation would outweigh these considerations.

“To our supporters, we thank you for showing patience and continuing to back the club. We will continue to fight against what we believe is an unjust outcome.”

Elsehwere, third-placed Motherwell and Aberdeen will join Rangers in being put forward for whatever Europa League format can survive the ongoing health crisis. St Johnstone, who had an outstanding trip to Ibrox to fit in, moved above Hibernian into sixth place courtesy of their higher points average.

SPFL chairman Murdoch MacLennan said: “Scottish Government restrictions and deep concerns for both player and spectator safety left the SPFL with no realistic option but to call the Ladbrokes Premiership now and we thank the Premiership clubs for their support on this decision.”

Chief executive Neil Doncaster added: “On Friday, Ladbrokes Premiership clubs expressed their clear and unanimous view that there was no realistic prospect of completing the outstanding fixtures from season 2019-20.

“The SPFL board met this morning and in line with the express agreement of member clubs in April, the board determined that league season 2019-20 and the Ladbrokes Premiership be brought to an end.

“This decision now enables us to pay out around GBP 7million in fees to help clubs stay afloat during this incredibly difficult time. We will begin processing these payments immediately.

“The focus of all those involved in the game will now turn to how we get football up and running again safely as soon as possible.”