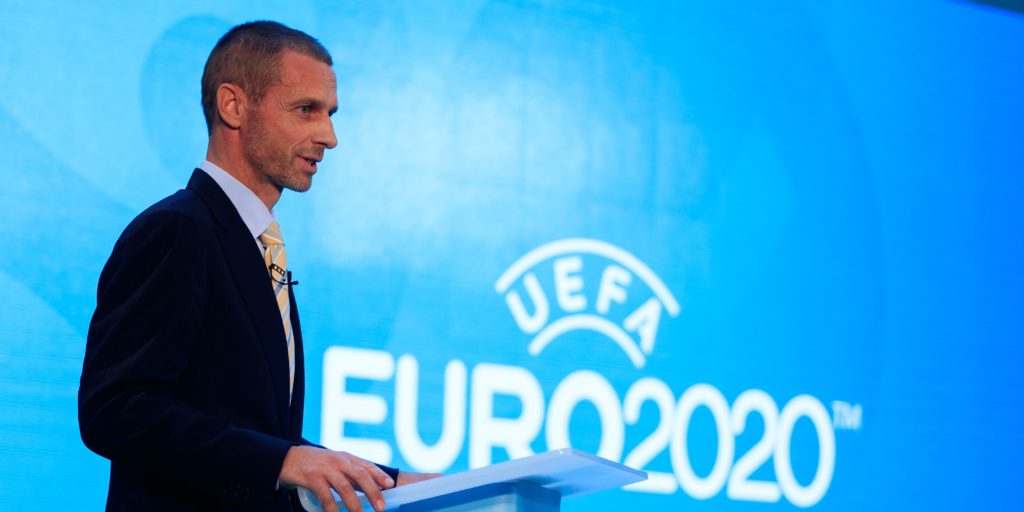 The Bundesliga made a return to action behind closed doors at the weekend and many other leagues are preparing to resume in front of empty stands.

Domestic and continental competitions were halted across Europe in mid-March due to the Covid-19 crisis, leading to the extension of 2019-20 campaign and the costly postponement of Euro 2020.

The Bundesliga made a successful return to action behind closed doors at the weekend and many other leagues are preparing to resume in front of empty stands, with Ceferin confident the situation will soon improve.

Asked whether he would bet a million dollars that Euro 2020 will be played in 2021, he told the Guardian: “Yes, I would. I don’t know why it wouldn’t be.

“I don’t think that this virus will last forever. I think it will (change) sooner than many think.

“It’s a serious situation but it is going down now and we are being more cautious.

“We know more about the virus and in general I’m an optimistic person.

“I don’t like this apocalyptic view that we have to wait for the second and third waves or even a fifth wave. People you know are likely to die one day, but do we have to be worried today? I don’t think so.

“We are ready and we will follow the recommendations of the authorities but I’m absolutely sure, personally, that good old football with fans will come back very soon.”

Ceferin says the situation at UEFA is “not that alarming” but says “there’s a lot of work still to be done” as it looks out for leagues and stakeholders.

The president of European football’s governing body does not think football will change forever as it “didn’t change after the Second World War, or First World War, and it will not change because of a virus either”.

But UEFA is looking at changing some things, with Ceferin mentioning the potential of a “luxury tax” when the subject of financial fair play was broached.

“If they don’t follow the rules they will always be sanctioned but of course we are (always) thinking about how we can improve our regulations and, if necessary, adapt to new times,” he said.

“This will not happen very soon but we are thinking of improving (FFP); modernising it and doing something more about the competitive balance. We are also considering some sort of ‘luxury tax’, if it is possible.

“So, there are many ideas but trust me, during these difficult times we have stopped thinking more or less about changes that will happen in the future.

“Now we have to steer our ship on to the right course and we are close to doing it. Then, when things calm down, we will go back to the old tasks.”