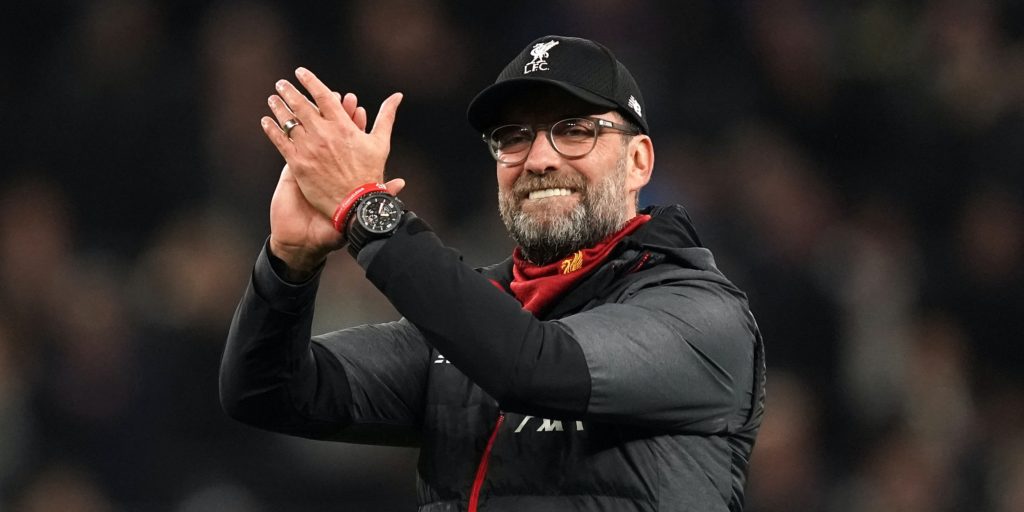 Players are now allowed to train in small, socially-distant sessions lasting no longer than 75 minutes.

Liverpool manager Jurgen Klopp insists the spectacle of empty stadiums will not lessen the intensity of any team if the Premier League gets the go-ahead to resume in June.

Top-flight players are returning to training this week after the clubs voted unanimously to do so at a shareholders’ meeting on Monday, the first significant step in the return to play protocols.

A number of hurdles still need to be overcome but any matches will take place behind closed doors, which was trialled to mixed reviews when the Bundesliga became the first major European league to come back last weekend.

Liverpool have more reason than most for wanting the 2019-20 campaign to conclude as they need just two more wins to capture a first Premier League title.

And while Klopp acknowledged that keeping fans away from Anfield is far from ideal, he thinks the German top-flight’s restart proved that the competition and will to win is cheapened by the absence of spectators.

“But Anfield will not be packed for a while, so that’s what we have to accept. When we start, it goes really again for everything. The competition will make the intensity.

“So it’s not about ‘Oh, Liverpool have to win two games’. It’s not that we want to win the last two or whatever and come through somehow. We want to play the best possible football, better than other teams fighting for the Champions League, fighting to stay in the league.

“All the physical numbers of the games in Germany were incredibly high, so like 117 or 118km running, without anybody shouting at you that you have to run. Just because you want it, because you do it for your team-mates.

Players are now allowed to train in small, socially-distant sessions lasting no longer than 75 minutes for anyone as part of phase one of ‘Project Restart’.

Asked about his reaction to learning clubs would be allowed to train again, Klopp said: “I was over the moon.

“It will be intense, for the coaches especially because a lot of players in small groups means a lot of sessions, but we’ve had enough time to rest so we will be fine.

“From a physical point of view, the boys are in a good shape, I think. Then we have to start getting used to the pitch, football boots and balls again.

“For the body that’s a big challenge because these little turns and stuff like this, these football-specific things, they make all the difference.

“It’s like when you come back from an injury, the boys are fit really early from an endurance point of view – they could run a marathon probably – but the moment you start playing football, you can see how different it is.”

Klopp also explained the level of minute detail that has gone into their Melwood training base to ensure the players are kept apart.

He added: “You should see Melwood, it’s unbelievable. It’s all one-way, so we will not meet.

“We meet on the training pitch and if you can see maybe somebody from the back or if they turn around you can see his face, but then you have to walk because we have to keep distance.

“If you are in the wrong point and want to go to the toilet – which is an outdoor space – then it’s a really long way to the toilet because you cannot just turn around and go back.