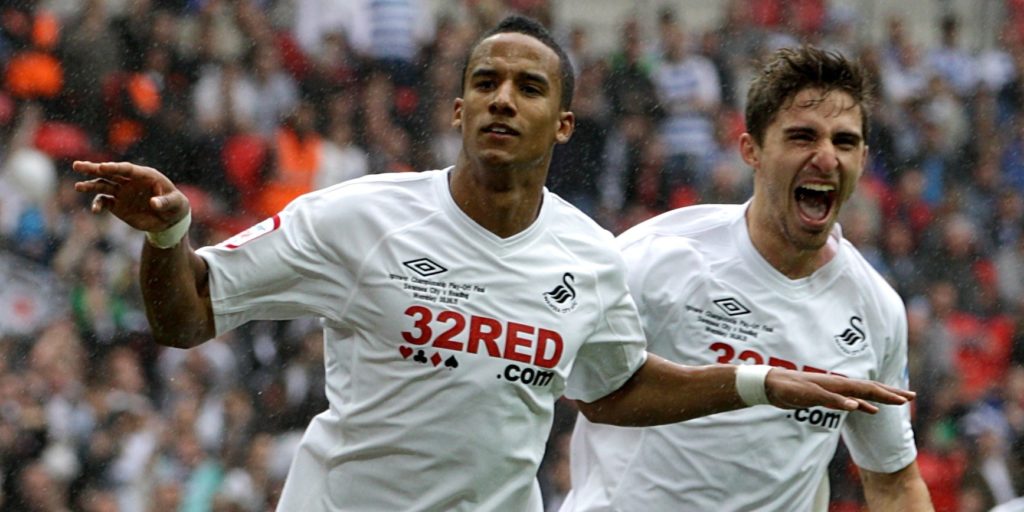 Sinclair became only the second player, behind Clive Mendonca, to bag a play-off final treble at Wembley.

Scott Sinclair ended Swansea’s 28-year absence from the promised land with a Wembley hat-trick that has gone down in play-off history.

Brendan Rodgers’ side thrilled fans during a memorable 2010-11 campaign, but the Welsh outfit fell just short of automatic promotion from the Championsip.

QPR and Norwich went straight up to the Premier League as third-placed Swansea went about joining them the hard, if more gratifying, way.

After sealing a shot at promotion by overcoming Nottingham Forest in the play-off semi-finals, one of the Football League’s most talked about players did the damage against Reading under the Wembley arch.

Sinclair had been farmed out by Chelsea on loan to six different clubs before making his GBP 1million switch to the Liberty Stadium in 2010.

The forward flourished in Wales and repaid the club in spades, with his match-winning treble against Reading earning Swansea an estimated GBP 90million windfall.

Sinclair struck twice in a devastating two-minute spell midway through the first half to set the Swans on their way – the opener coming from the penalty spot – before Stephen Dobbie added a third.

Reading displayed plenty of never-say-die spirit and hauled themselves right back into it through a Joe Allen own goal and Matthew Mills’ strike in a gripping clash befitting the Wembley showpiece, only for Sinclair to smash home his second penalty in the 80th minute.

Victory completed an astonishing eight-year turnaround for the south Wales club after they narrowly avoided relegation from the Football League, with Sinclair becoming only the second player, behind Clive Mendonca, to bag a play-off final treble at Wembley.