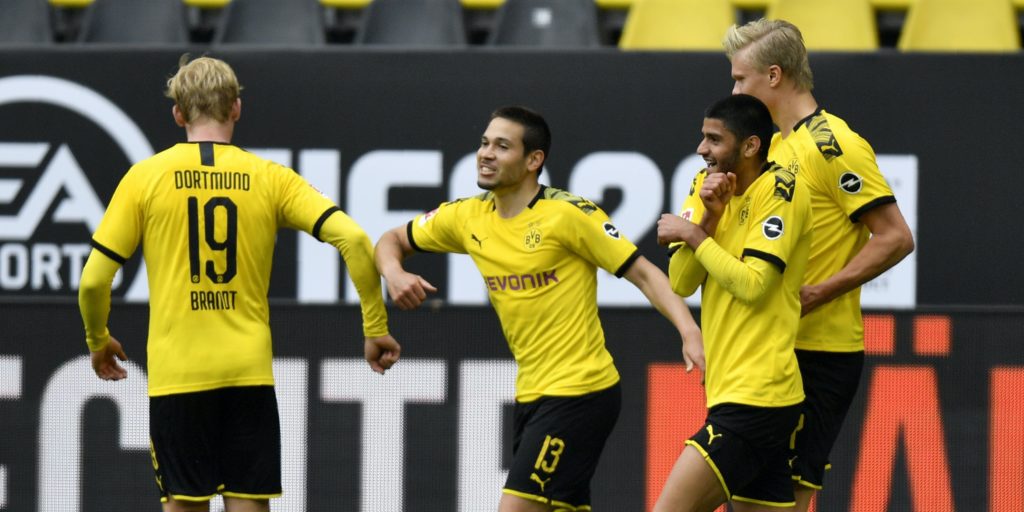 Dortmund’s 4-0 shellacking of rivals Schalke was the performance of the first weekend back.

The Bundesliga remains the only show in town this weekend, with Bayern Munich and Borussia Dortmund focusing on important matches before they face off in a crunch midweek clash.

The German top flight was the first major league to resume action amid the coronavirus pandemic and continues into matchday 27 off the back of a seemingly successful return behind closed doors.

Dortmund’s 4-0 shellacking of rivals Schalke was the performance of the first weekend back, but Bayern’s 2-0 win at Union Berlin means they boast a four-point cushion at the top heading into a potentially pivotal few days.

BVB welcome the perennial Bundesliga champions to Signal Iduna Park on Tuesday in a crucial, mouth-watering clash, but before that both teams need to avoid being on the wrong side of an upset on Saturday.

Dortmund have the chance to put the pressure on Bayern by at least temporarily reducing the gap to one point when they travel to sixth-placed Wolfsburg, who won 2-1 at Augsburg on their return to action.

Borussia boss Lucien Favre said: “Before we speak about our match against Bayern, we should first talk about winning the game in Wolfsburg.

“Wolfsburg has changed a few things tactically. They have a more concrete first team and are very stable.”

Axel Witsel and Marco Reus are unavailable for the trip to Wolfsburg, but Emre Can and teenager Gio Reyna, who pulled up injured in the warm-up against Schalke, trained on Friday.

Bayern welcome Eintracht Frankfurt in Saturday’s late kick-off, with head coach Hansi Flick hopeful of being able to call upon Serge Gnabry as he waits to see how Thiago Alcantara progresses.

“The duel with Dortmund next week does not matter,” he said.

“We play against Frankfurt. That is the next step we want to take. Only then does the view go to Dortmund.

“Like every game, we prepare and have analysed a lot. Frankfurt has a lot of dynamism and a lot of heart.

“When I had my break, I saw a lot of Eintracht games, which I really liked.

“Regardless of the results of the past few weeks, we expect a team that wants to get back on the road to success.

“They have one of the best wingers with (Filip) Kostic. We will have to put everything in the balance. “

Frankfurt come into the match fresh from stumbling to a 3-1 home loss to Borussia Monchengladbach, who are just six points behind leaders Bayern ahead of their match against Bayer Leverkusen.

That match between third and fifth is the Bundesliga’s top fixture this weekend, while Saturday will also see rock-bottom Paderborn host Hoffenheim and Freiburg face relegation-threatened Werder Bremen.

David Wagner’s Schalke will look to bounce back from their chastening Revierderby loss at Dortmund when welcoming Augsburg on Saturday afternoon.

RB Leipzig, fourth and seven points behind leaders Bayern, head to Mainz and Cologne close out the matchday 27 fixtures with a home match against Uwe Rosler’s Fortuna Dusseldorf.