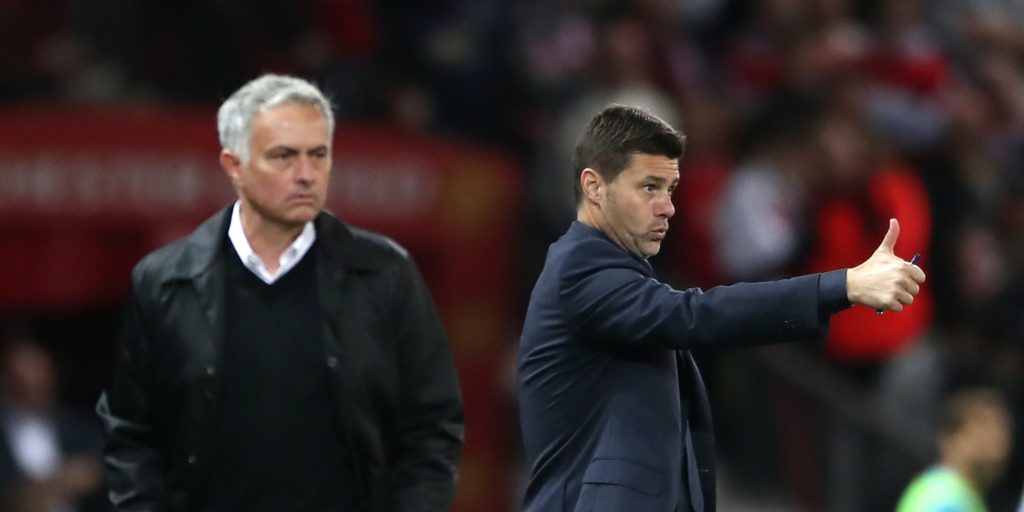 Pochettino has often been linked with jobs that Mourinho had but the roles were reversed when the Portuguese replaced him at Tottenham in November.

Former Tottenham boss Mauricio Pochettino has seen the funny side of Jose Mourinho succeeding him at the north London club.

The Portuguese became Spurs boss in November when Pochettino was relieved of his duties after a hugely successful five-and-a-half year spell in charge.

Pochettino is now off the payroll after his six-month gardening leave ended, meaning he is free to take other jobs without the worry of prospective employers having to pay compensation.

For much of his time in management, Pochettino has been linked with jobs that Mourinho had, notably at Real Madrid when he was in charge of Espanyol and then at Manchester United last season.

And Pochettino has revealed the time he thought he would be Mourinho’s successor at the Bernabeu, leading to the Portuguese having a joke with him.

“With Jose, we know each other for a long time,” Pochettino said. “When I was the coach of Espanyol, and he was at Real Madrid, we had a very good relationship.

“He’s a top coach. And in life, look what happens. I always think I’d replace him.

“He was at Real Madrid. I say, ‘Oh, maybe one day I can take your place at Real Madrid’, and look at how life works out! He has taken my place at Tottenham. Unbelievable, eh?

“Some information appeared that maybe I was on the radar of Real Madrid in case Jose goes. It was in the past, years ago.

“We (Espanyol) were going to play Real Madrid and in the press conference before the game, the media asked me about that. I said I am never going to use these type of rumours to sell myself. To say, Yes … maybe one day. No. I am very humble and realistic. I don’t like to play with this.

“I said, ‘Oh, I am not thinking about that and, by the way, my kids are sleeping in Espanyol pyjamas every night. So it’s very difficult for me to think about changing. I am more than committed to Espanyol.’

“So, when I arrived to the stadium, Jose was waiting for me with a bag with a very nice bottle of French red wine and two kits of Real Madrid, shirts and shorts. He’s says, ‘OK, these are for your kids to wear from now on!’.

“We were joking from there and we have kept a very good relationship.”

The pair have recently spoken, while Mourinho said following his arrival at Spurs that Pochettino would always be welcome back at the training ground at any time.

There is no hostility and Pochettino is glad that Spurs are in Mourinho’s hands.

“I am so happy that he is at Tottenham, replacing me,” he admitted. “And of course I am happy as well to leave the club in the way that we left it, with all the facilities that are the best in the world.

“For sure, he is very grateful for the way that we helped to build the club, which is now his club.”

Pochettino also revealed that he had been in contact with chairman Daniel Levy in the past few days.

With his employment with the club officially ending, the pair have remained friends and shared a chat, where Pochettino could not help having a little dig with Levy about his appointment six years ago.

“In the last few days, I was talking with Daniel, it’s not a problem to explain this … I wanted to translate my gratitude and that of my coaching staff and all our families because he was the person, with all the board, that trusted us, who gave us the structure to work and to try to achieve the objectives that were in the table, that was the most important thing,” he said.

“I also joked with him, ‘Oh, you signed me because the manager you liked at that time, (Louis) Van Gaal, chose to go to Manchester United!’

“Daniel told me that at the time, he was very clear about that, it was very public. I was a very young coach, with my experience in Spain and my one-and-a-half years in Southampton.

“The football vision at Tottenham was completely different then to what it is now. That’s why it was amazing for us as a coaching staff to go very quickly (to a higher level).

“To be involved and help the club to be the club that it is today is fantastic. Today, Tottenham is one of the best clubs in the world. We feel very proud of that.

“I was telling Daniel, our success is also your success because you chose us and you gave us the possibility to build this relationship with the players and staff, all the people that were in Tottenham and with the fans. I told him the architect was him.

“The decision was fantastic for us [to be hired] and when the decision is not good for you, you need to show the respect. And always Daniel is going to be my friend, all the people there, I have very good relationships with them.”