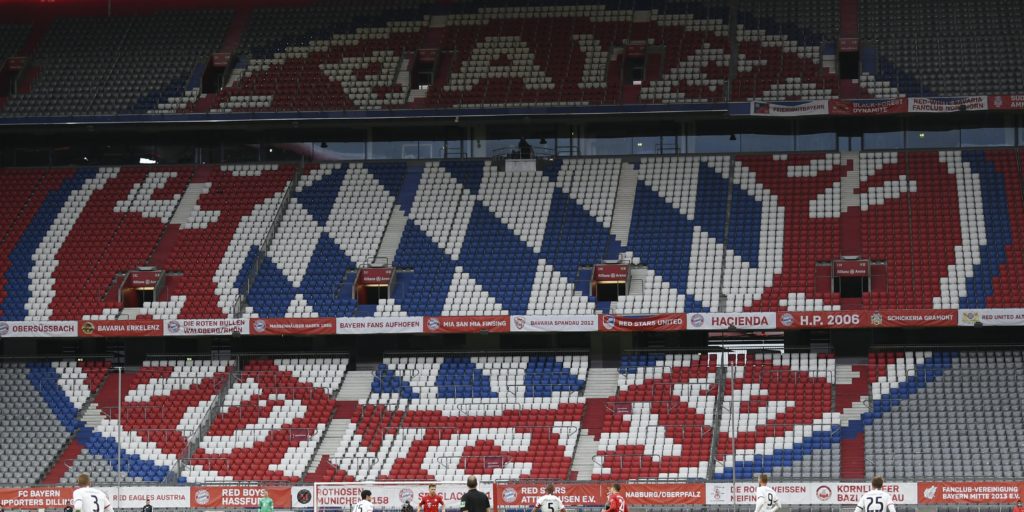 Die Roten maintained their four-point lead over Dortmund at the top of the Bundesliga before Tuesday’s contest at Signal Iduna Park.

Bayern maintained their four-point lead over Dortmund at the top of the table with a 5-2 win over Eintracht Frankfurt shortly after Dortmund had won at Wolfsburg.

Goals from Leon Goretzka, Thomas Muller, Robert Lewandowski and Alphonso Davies did the damage – along with a Martin Hinteregger own goal.

They could move seven points clear and put one hand on an eighth successive league title with a win, but Flick says nothing will be decided on Tuesday.

“We hope for a nice game on Tuesday,” he said on the club’s official website. “Regardless of the result, nothing will be decided afterwards.”

Despite a handsome scoreline there were areas of concern for Bayern. After goals from Goretzka, Muller and Lewandowski put them 3-0 up, their vulnerability at set-pieces was highlighted as Martin Hinteregger scored twice inside four minutes to make a game of it.

Davies restored some calm with a fourth goal, tough, and then Hinteregger put through his own net to make it a comfortable ending for the hosts.

“I’m very happy with the first half,” Flick added. “We dominated. The first half was as we imagined it to be.

“After the break we came out and made it 3-0. Maybe we ticked off the game a bit afterwards and maybe the concentration was missing.

“We weren’t that good against the ball. Frankfurt has very good standards. We knew that. We didn’t look well there. We look at that and will learn from it.”

Meanwhile, Bayern chairman Karl-Heinz Rummenigge has confirmed the club has not taken up the option of turning Phillipe Coutinho’s loan deal from Barcelona into a permanent move.

The Brazilian is on a season-long loan at the Allianz Arena, but has not set the world alight.

“We’re going to plan our squad for next season and we’ll see if he still has a role to play with us or not.”

Frankfurt are in free-fall having lost five games in a row either side of the extended hiatus and they could be just two points above the relegation zone if Fortuna Dusseldorf win on Sunday.

Conceding a goal in the 40th minute and then just 45 seconds after the restart is what killed them.

Boss Adi Hutter said: “The crux of the matter was that we conceded a goal shortly before and after the break.

“I was very impressed by the reaction to how we scored goals in two set-play situations. We still had a few chances after that, including the (Filip) Kostip post shot.

“The defeat is OK, but I’m annoyed that we conceded five goals. But we can build on the performance.”