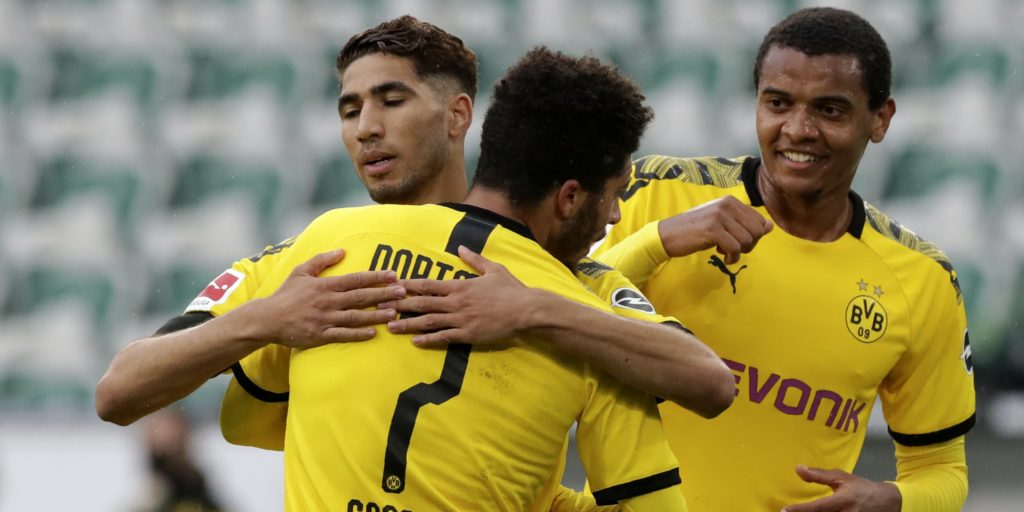 Jadon Sancho came off the bench to help boost Borussia Dortmund’s Bundesliga title hopes with a 2-0 win at Wolfsburg.

Sancho, who is still being used sparingly after a groin strain, launched a lightning counter-attack which ended in Achraf Hakimi firing his side’s second goal in the 78th minute.

Raphael Guerreiro had put the visitors in front in the 32nd minute and the late dismissal of Felix Klaus for a foul on Manuel Akanji ended any Wolfsburg hopes of getting back in the match.

With Tuesday night’s potential title decider against Bayern Munich looming, Dortmund, who started the day four points adrift of their rivals, knew they could not afford any slip-ups.

But although they made a lively start they created few clear-cut chances and Wolfsburg’s Wout Weghorst came close to giving his side the lead with a 25th minute header.

Dortmund settled their nerves in the 32nd minute when Guerreiro knocked home an unmissable opener from close-range after Thorgan Hazard drove the ball across the six-yard box.

Hazard came close to increasing Dortmund’s lead just before the break but he just failed to react quickly enough to reach a similar ball across the box from Hakimi.

The home side started the second half in impressive fashion and should have equalised in the 48th minute when the unmarked Renato Steffen ballooned a simple effort over the bar with only keeper Roman Burki to beat.

Daniel Ginczek came close from a tight angle before Weghorst caught the visiting defence napping with a dangerous ball across the face of the box which eluded his team-mates.

Sancho made his introduction when he replaced Julian Brandt in the 65th minute and, after flapping at his first effort, he turned provider with his mazy run and unselfish lay-off to Hakimi.

Klaus was rightly dismissed for his hack at the back of Akanji’s leg four minutes later, then Sancho turned provider again to flick Haaland clear, only for the in-form striker to uncharacteristically fluff his chance to make it three.