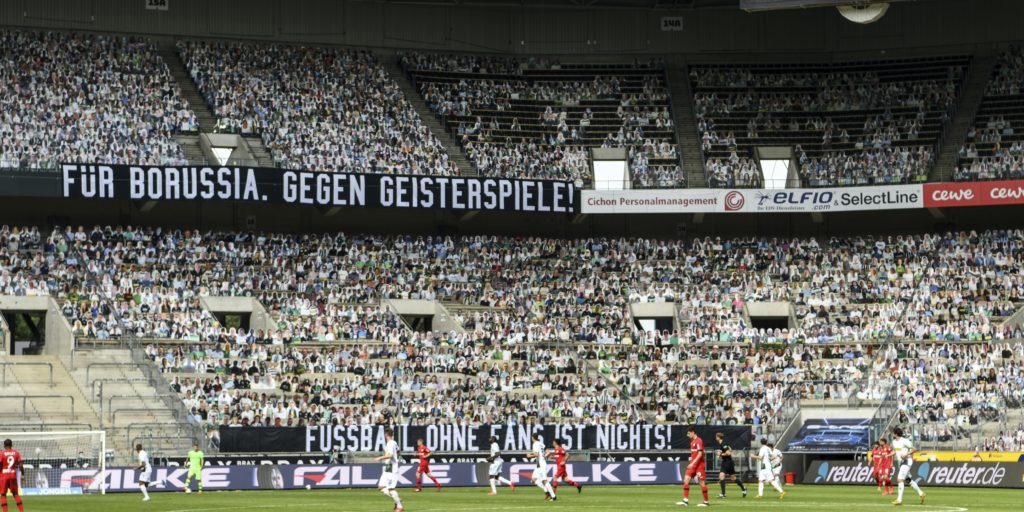 There were also banners present protesting against ghost games.

Kai Havertz bagged a brace for the second time in six days as Bayer Leverkusen leapfrogged Borussia Monchengladbach into third in the Bundesliga with a 3-1 win in front of a stadium full of cardboard cutout fans.

Havertz has been linked with a summer switch to Chelsea and the German forward keeps putting himself in the shop window, following up his double at Werder Bremen on Monday with another two goals.

Borussia-Park was packed with thousands of cardboard cutouts of fans to make up for an otherwise empty stadium, while there were also banners protesting against ghost games.

The 20-year-old provided the finishing touch to a fluid counter-attack to give the visitors a seventh-minute lead, slotting underneath Gladbach goalkeeper Yann Sommer first time after being played through by Karim Bellarabi.

Marcus Thuram equalised with an emphatic strike seven minutes after half-time but parity would not last for long as Havertz scored from the penalty spot just before the hour after Nico Elvedi fouled Bellarabi in the area.

Sven Bender made sure of the win for Leverkusen nine minutes from time when he headed home from Kerem Demirbay’s free-kick.

Following a fifth successive victory in all competitions, Leverkusen stayed within four points of second-placed Borussia Dortmund, who overcame Wolfsburg 2-0 thanks to goals from Raphael Guerreiro and Achraf Hakimi.

Werder Bremen boosted their survival hopes with a first win in eight matches, with Leonardo Bittencourt’s 19th-minute goal helping them claim a 1-0 win at Freiburg.

Bittencourt fired beyond Freiburg goalkeeper Alexander Schwolow after being put through by Davy Klassen.

Manuel Gulde looked to have levelled in the closing stages, shortly after Philipp Bargfrede had been sent off for two bookable offences, but the effort was chalked off for offside.

Second-bottom Bremen therefore moved to within two points of safety.

Paderborn remain rooted to the foot of the table after a 1-1 draw with Hoffenheim in a game where both goals were scored in the first nine minutes.

Robert Skov put Hoffenheim ahead in the fourth minute but Dennis Srbeny levelled soon after.