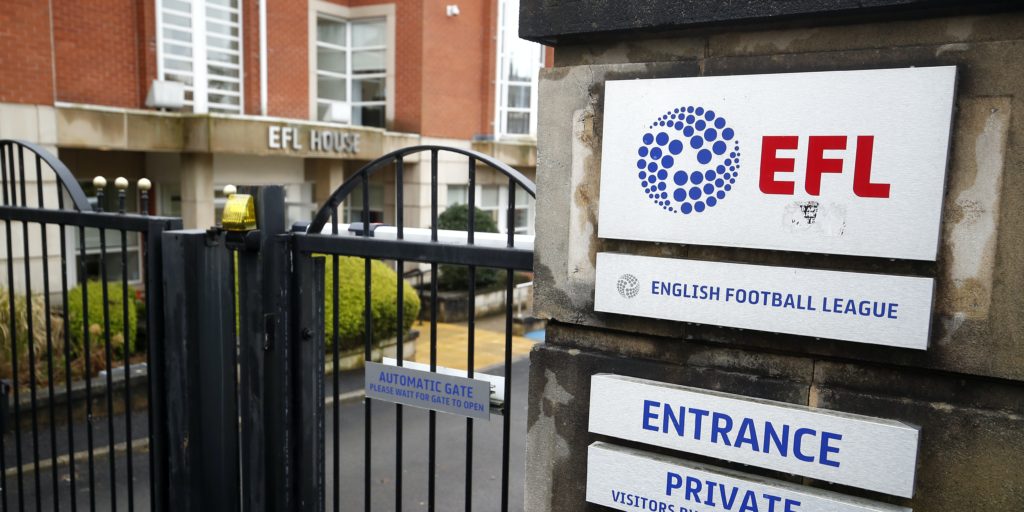 A total of 1014 Championship players and staff were tested over the past 72 hours.

Two individuals from the same Championship club have tested positive for coronavirus, the EFL has announced.

A total of 1014 players and staff from all 24 Championship clubs were tested over the past 72 hours, and the results reflect an almost identical ratio to those reported in the Premier League’s second wave of testing.

In a statement the EFL said: “The EFL can confirm that 1014 players and Club staff from all 24 Championship Clubs have been tested for COVID-19 over the course of the last 72 hours, with two individuals testing positive from one club.

“Those players or club staff who have tested positive will now self-isolate in line with the guidelines provided by the EFL and only those who have tested negative will be permitted to enter training ground facilities.

“The EFL will continue to make regular and relevant announcements as appropriate in respect of the testing programme to support competition integrity and transparency.

“No specific details as to Clubs or individuals will be provided by the League.”

The results will encourage those who wish to see a resumption of the Championship season next month, with talks ongoing between officials in both the second tier and League One.

Earlier on Sunday, Bournemouth revealed that one of their players is among the two positive tests recorded among the latest 996 tests on Premier League players and staff.

Although all positive tests are announced anonymously, Bournemouth took the step of revealing they were one of the two top flight clubs affected by the lastest tests.

A Bournemouth statement read: “AFC Bournemouth can confirm that one of its players has tested positive for Covid-19, following the club’s second round of testing.

“Medical confidentiality means the player’s name will not be disclosed, and the club asks for this to be respected.

“In line with Premier League protocols regarding positive tests, he will self-isolate for a period of seven days before being tested again at a later date.

“Following strict adherence of the Premier League’s return to training regulations, the club’s training ground remains a safe working environment for players and backroom staff, who will continue to be tested for Covid-19 twice per week.”

The unnamed Bournemouth player, and the other positive test, will now self-isolate for seven days.

In the first round of testing six people were shown to have the virus, including Watford defender Adrian Mariappa and Burnley assistant manager Ian Woan.

After clubs unanimously voted last Monday to resume limited group training, players up and down the league have returned to their training grounds with team-mates this week after more than two months away.

Meanwhile former FA chief executive Mark Palios has warned EFL clubs the financial impact of the coronavirus pandemic could be even greater than the GBP 200 million blow first feared.

EFL chairman Rick Parry estimated the cost of the shutdown earlier this month but Palios, also chairman of League One Tranmere, believes the sum will continue to grow.

Speaking on ‘Ridge on Sunday’ on Sky News, Palios warned: “Whilst you may look at the ‘hole’ which has been articulated as GBP 200 million to September – I think it’s bigger than that.

“There is a real financial maelstrom coming towards the league at this point in time.

“I personally believe we haven’t seen the worst of it yet, and, during the course of the summer, you’ll see a lot more financial stress on the clubs as we move onwards and continue to pay wages.

“I think what you’ll see is a lot of clubs will stumble down the road to insolvency. You might see people getting high court orders against them. They’ll bumble on for a period of time.”