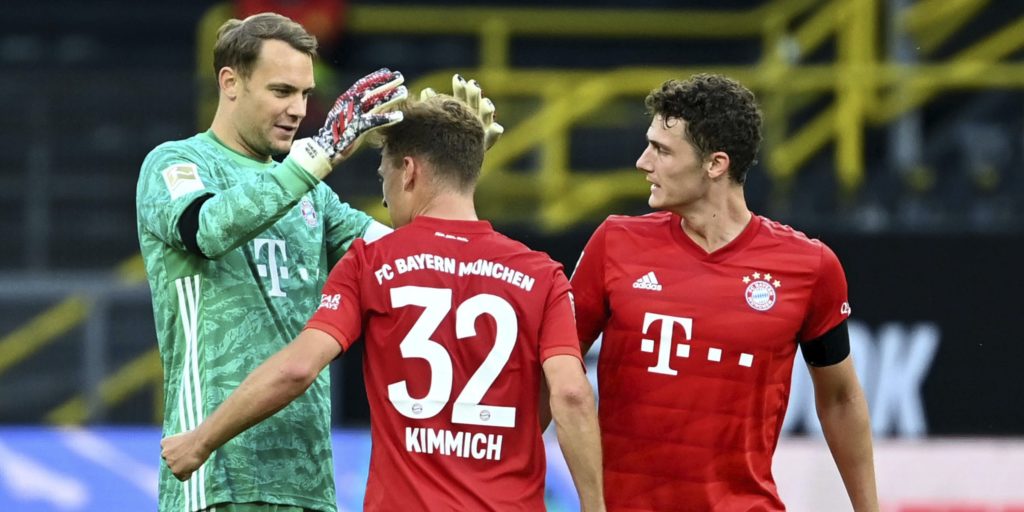 Dortmund failed to capitalise on a bright start.

Joshua Kimmich believes Borussia Dortmund will struggle to keep up with Bayern Munich after his sensational chip sealed a “brutally important” victory in the Bundesliga title race.

All eyes were on Signal Iduna Park as ‘Der Klassiker’ played out in front of empty stands but millions of extra football-starved viewers.

But Dortmund failed to capitalise on a bright start and Kimmich put Bayern on course for a 1-0 win that extends the perennial champions’ lead to seven points with a smart chip from 20 yards.

“We now have a good cushion on Dortmund,” the lung-busting matchwinner said. “That was brutally important today.

“It’ll be mentally difficult for Dortmund to keep up. We have to reaffirm this lead in the next games.

“You could see that it was very, very intense and we had to work our way up to the three points.

“It was relatively balanced, especially in the first half we made many simple mistakes. Dortmund were very bold.”

Bayern head coach Hansi Flick believes victory at their nearest rivals was a “big step” and skipper Manuel Neuer knows an eighth successive Bundesliga crown is within their grasp.

“I’m glad about the victory on the road,” the goalkeeper said. “It was an important match. We’re always extra motivated away to Dortmund. You could see that.

“The one-goal lead wasn’t a real cushion. Sometimes Dortmund got into the danger zone in the second half.

“Of course we didn’t take all our chances. Now it’s up to us. It was an important sign and an important victory.”

Dortmund defender Mats Hummels knows the Bayern mentality better than most, having been part of their last three Bundesliga-winning sides before returning to Signal Iduna Park in the summer.

“We were too wasteful around the penalty area in the first half,” he said. “We had two or three opportunities to shoot.

“It was that all-important final ball. It was missing in certain moments, otherwise we would have had chances.

“When we did have the chances, then our finishing wasn’t good enough. It was not a poor performance. We fell just a little short.

“Every team apart from Bayern is now out of the title race. Now it is entirely up to Bayern to decide whether they win it or not.

“We’re seven points behind and can’t do anything other than win our matches, while at the same time also hoping that they make three slip-ups in the remaining six matches.”

Dortmund head coach Lucien Favre echoed the defender’s sentiments after a match in which the video assistant referee inexplicably did not intervene when Erling Haaland’s second-half shot was blocked by Jerome Boateng’s arm.

“We made a very good start in the opening 30 minutes but we sat too deep after that,” Favre said. “The second half was good too.

“We had opportunities. But the penultimate or final ball was missing.

“We at least deserved to draw. We played better than we did against Wolfsburg and Schalke.”