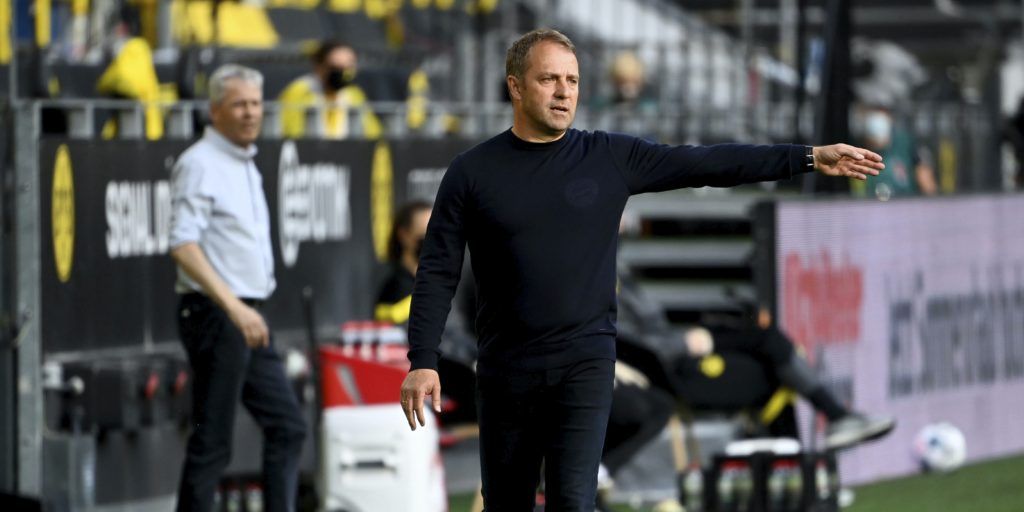 The perennial German champions are on course for an eighth successive league title.

Bayern Munich boss Hansi Flick wants his side to build on their performance against title rivals Borussia Dortmund as they bid to open up a 10-point lead at the top of the Bundesliga when they host Fortuna Dusseldorf on Saturday.

The perennial German champions are on course for an eighth successive league title after Joshua Kimmich’s stunning chip sealed a 1-0 win at their nearest rivals on Tuesday.

Bayern have the chance to take another giant step towards the Bundesliga crown on Saturday, when Uwe Rosler’s relegation-threatened Dusseldorf arrive in Bavaria.

Few expect anything other than a home win, which would stretch their lead at the summit to 10 points with Dortmund not in action against Paderborn until Sunday.

“The Dortmund game was on the level of a Champions League game – two top teams against each other,” Bayern head coach Flick said. “A lot was invested there.

“Now it is important to build on this, especially in the home game. The performance that we also achieved in Dortmund.

“I think (Dusseldorf) make things difficult for their opponents to build-up play.

“It’s important to stay focused and work as a team on the pitch. Everyone needs to play their part.”

Thiago Alcantara will again be absent for Bayern against Dusseldorf, who come into the match fresh from Wednesday’s 2-1 comeback win against injury-hit Schalke.

Pressure is increasing on head coach David Wagner, with the former Huddersfield boss in desperate need of a first win since play resumed as Werder Bremen head to Gelsenkirchen.

“When it’s sometimes not possible to follow your original plan, you have to try something new,” the Schalke boss said.

“We had to do things differently in Dusseldorf, but that’s definitely not how we have approached things so far, or how we want to be playing long term.

“At least we had more stability in defence, but unfortunately we didn’t defend well in two key moments. We lost the game because of that, which is incredibly frustrating.”

Elsewhere on Saturday, European hopefuls Wolfsburg will look to build on their shock 4-1 win against Bayer Leverkusen when they welcome Eintracht Frankfurt to the Volkswagen Arena.

Hertha Berlin will look to continue their unbeaten start to life under Bruno Labbadia when Augsburg arrive, while Hoffenheim travel to out-of-sorts Mainz.