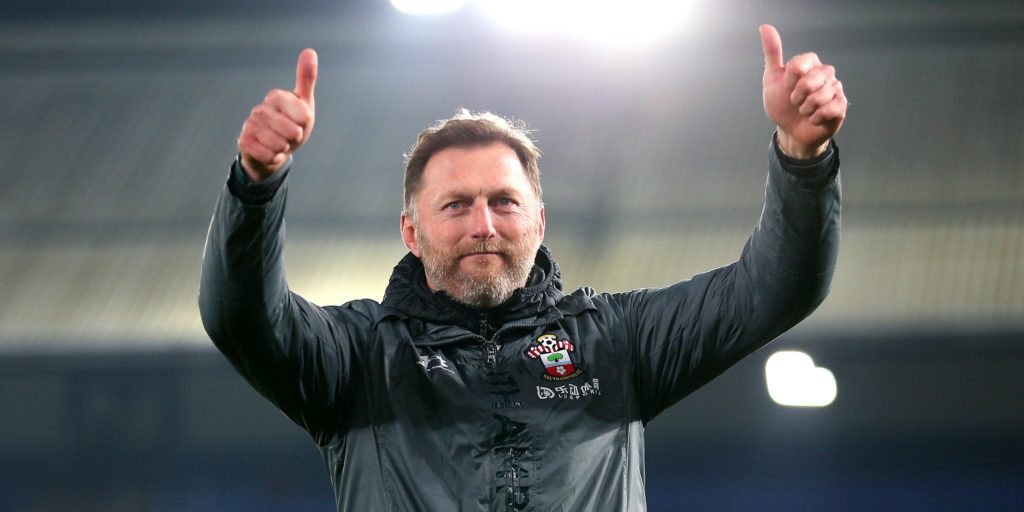 The Saints have tied the Austrian down for another four years.

Ralph Hasenhuttl had no hesitation extending his contract at Southampton – a club that not only matches his ambitions but have proven themselves to be “something special” during dark times.

As the Premier League edges towards a resumption, Saints received a welcome shot in the arm as the 52-year-old agreed a new and improved four-year deal at the club.

Hasenhuttl quickly established himself as a popular figure after succeeding Mark Hughes in December 2018 and impressively steered the ship back on course after October’s record-breaking 9-0 home loss to Leicester.

Saints still need a couple of wins to fully extinguish the threat of relegation but the Austrian is looking up the table when football resumes after the coronavirus suspension – a challenging period that has strengthened his feelings towards a club that has stepped up during tough moments.

“As everybody can see, I was always very happy with working here with this club,” Hasenhuttl told the PA news agency.

“I could feel the trust of all the people around me, especially of the chairman, especially in difficult moments.

“I want to lift this club on a higher level. With all the difficulties we had in the past, this was bringing us closer together, I think.

“You have something of an atmosphere here in the moment, a very committed atmosphere, and you can see it in the Covid crisis and also in the crisis we had in the autumn, that this club is something special.

“If you want to have something as a manager, then a club that is important for the city, for the town, the people who love to go to us, love to support us.

“And also, not only winning, also sometimes losing together, committed to you extremely.

“This is the feeling I have from the first moment here and that makes it so enjoyable for me to work here and to use all my energy every day in this fantastic training ground to develop this team.

“Therefore it was no question for me when they asked me to stay here.

“That is the first time I agreed to such a long-term project because so far I always stopped my contract earlier than I wanted to or that the clubs wanted me to do because I felt that there must be something more.

Hasenhuttl’s contentment should not be mistaken for complacency, with the Austrian determined to turn Southampton back into the club that impressed under Nigel Adkins, Mauricio Pochettino and Ronald Koeman.

The 52-year-old has been fine-tuning the SFC Playbook, a philosophy for the whole club to follow, in a bid to aid that process at a club that has been subject of recent reports about ownership and finance.

Asked if he had felt the need to seek assurances before signing, Hasenhuttl said: “No, no, the assurance should be that I get the commitment in the future also like we had so far.

“The rest is on us. On us to do a good job, on us to develop the players and us to bring good results and not ask for millions of pounds to sign expensive players.

“You never know what happens in the future in the transfer market, but we don’t want to do silly things or stupid things.

“So, stay in a solid way of financial risk and create an environment and atmosphere where you can develop players and where you can make them better.

“We are known for being a developing club.

“For a lot of players it was a step through to a big club, but as long as they are here, we should enjoy them playing for us.”

Saints are seven points clear of the drop zone ahead of the resumption of play, with the former RB Leipzig boss speaking to friends in the Bundesliga ahead of this hectic period.

Hasenhuttl expects Shane Long, who is soon out of contract, to continue through the extended season while Saints captain Pierre-Emile Hojbjerg still has another year left on his deal but his long-term future remains up in the air.

“If he extends his contract, I don’t know at the moment. But this topic will be also now more serious.”