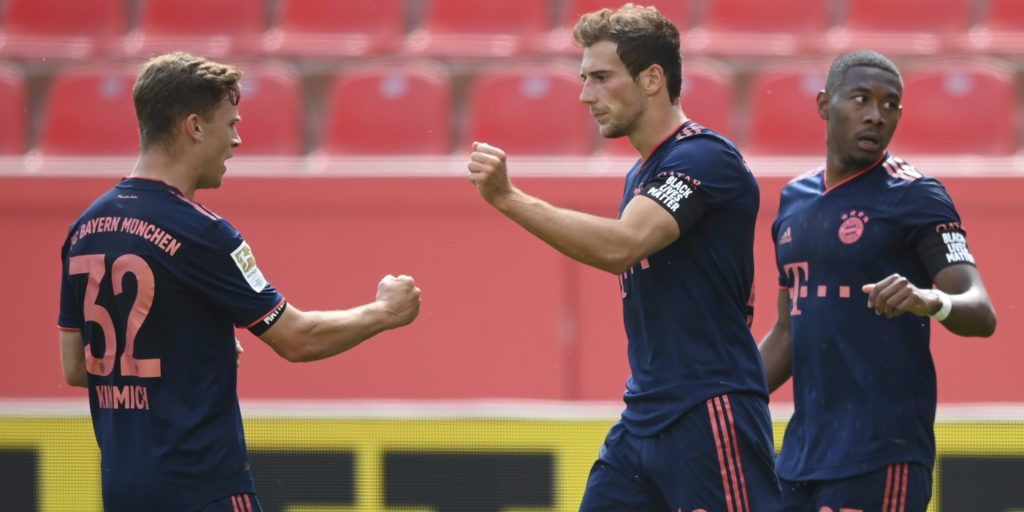 The perennial German champions already had one hand on the trophy but tightened their grip as the season enters the closing stages.

Bayern Munich edged closer to an eighth straight Bundesliga title as Hansi Flick’s men came from behind to win in style at Bayer Leverkusen.

The perennial German champions already had one hand on the trophy but tightened their grip as the season enters the closing stages by overcoming Peter Bosz’s Champions League hopefuls.

Leverkusen failed to build on Lucas Alario’s early opener as Bayern put their foot on the gas, with Kingsley Coman, Leon Goretzka, Serge Gnabry and Robert Lewandowski netting in a 4-2 win.

The hosts were without star turn Kai Havertz for the match and failed to build on Alario’s smart stabbed finish as Flick’s men took control at the BayArena.

Coman raced through to coolly level, with Goretzka firing home a fine left-footed shot before Gnabry rubbed salt into the wounds on the stroke of half-time.

Lewandowski’s 44th goal of the season in all competitions ended the tie as a contest, although 17-year-old Florian Wirtz will not forget his late stunner on an afternoon when players wore ‘Black Lives Matter’ armbands.

It was quite a collapse on an afternoon that had started so brightly for Bayer, with Alario racing in behind and producing a fine near post finish past Manuel Neuer.

Initially ruled out for offside, the video assistant referee gave the green light to a 10th minute goal that they failed to capitalise on.

Instead, Bayern were able to grow into the match and assert their authority, with the offside flag saving the blushes of Coman and Lewandowski after the pair somehow failed to score midway through the first half.

Flick’s side were pushing forwards and got the goal their play deserved in the 27th minute, when Coman was sent scampering through and coolly curled past Lukas Hradecky.

Bayern were bossing the play in a first half that saw Lewandowski and Thomas Muller pick up bookings which will rule them out of their next league clash with Borussia Monchengladbach.

The pair did keep their cool and the visitors took the lead, breaking from a Leverkusen corner at speed and playing some incisive football before Goretzka fired home a superb left-footed shot from the edge of the box.

Gnabry was prevented from adding to that 42nd minute goal when thwarted one-on-one by Hradecky, but the former Arsenal man would not be denied for long.

Leverkusen were all too easily opened up by Joshua Kimmich’s ball over the top, with Gnabry coolly lifting the ball over Hradecky on the stroke of half-time.

Bosz’s men returned from the half-time break with renewed energy, but Bayern were willing to play on the break and Muller went close to scoring.

A mixture of good defending and poor decision making was costing Leverkusen, while Gnabry striking just over as the visitors pushed for a fourth that would come in the 66th minute.

Muller swung over a lovely cross and Lewandowski met it with a powerful header that beat Hradecky to put Bayern in cruise control for the remainder of a match that saw changes take the sting out of proceedings.

But just as the contest was winding down, a lovely cut back and curling finish by teenager Wirtz reduced the deficit and lit things up temporarily.