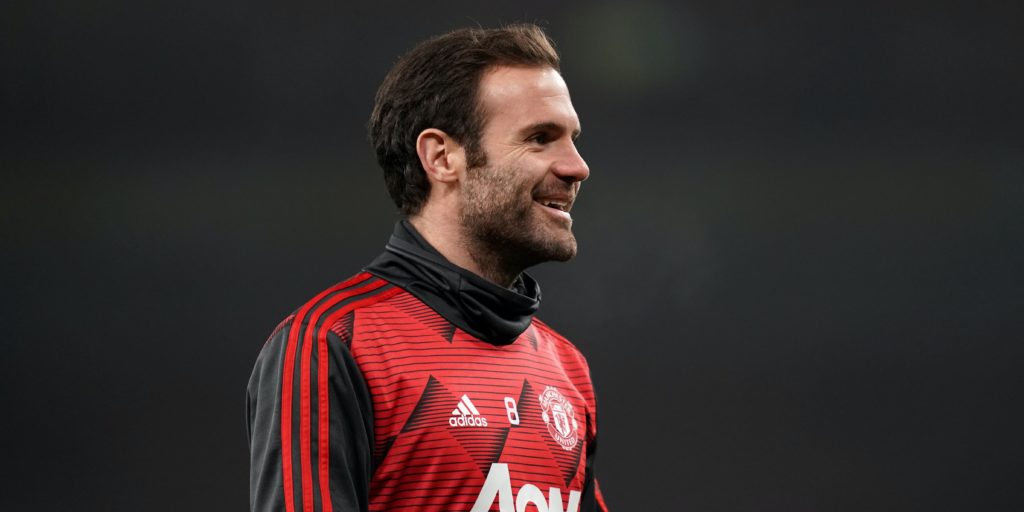 The Spaniard grew up admiring the likes of David Beckham, Ryan Giggs and Paul Scholes.

Juan Mata admits he finds it “surreal” to play for Manchester United and is still excited at the prospect of winning trophies at the club.

The 32-year-old signed for United in 2014 and has won the Europa League, FA Cup and League Cup while making over 200 appearances.

He has played under David Moyes, Louis Van Gaal, Jose Mourinho and Ole Gunnar Solskjaer so is part of the furniture at Old Trafford, but still has to pinch himself every day.

“That feeling of being a Manchester United player is really special and almost unique in football,” the Spaniard said in Amazon Prime’s exclusive docuseries Living Abroad.

“At times it feels surreal that in the morning I put on that shirt to train that I play in the stadium where players like Eric Cantona, George Best, David Beckham, Ryan Giggs and Paul Scholes have played.

“Players I watched as a kid from far away and especially that generation of Beckham, Scholes, Giggs and now I’m playing in their team and I am proud of that.

“I’ve been at the club for more than six years now, I’ve had a lot of good memories, with European titles like the Europa League and winning the FA Cup and winning the Carabao Cup, a cup I had never won and I was especially happy to win it.

“I’m excited to see United as a champion of a really important competition again like the Premier or Champions League which is where I think this club should be competing.”

Mata first arrived in England in 2011 when he joined Chelsea from Valencia, but he found life tough in a new country where he could not speak the language.

“Initially I found it hard here, especially communicating with the players from here,” he said. “At the time, (John) Terry and (Frank) Lampard were captains and helped me a lot at the start.

“I also learned that English football on the pitch and off is different from the rest, because it’s physically demanding, the games are high pace, and off the pitch the behaviour of the fan and the organisation of the Premier League is fantastic.

“And over time I gradually saw that I had made a very good decision.”

Life in Manchester could not be more different from Burgos – the northern town in Spain where Mata grew up.

But the midfielder has grown to love life in the north of England, living in a city-centre flat and spending time in the Northern Quarter.

“Manchester is a city that I would say is creative, a city in turmoil,” he added. “It’s a city I’ve been living in for more than six years and since I’ve been here it has changed a lot. I’d say it’s changed for the better.

“The expectations weren’t as high when I lived in London and I was going to move to Manchester, and from day one the city pleasantly surprised me.

“I like the areas with cafes, book shops, galleries, bars with live music, cinemas, areas that you can have a great afternoon and when family and friends come I try and bring them to these areas.”

Mata has also been won over by the city’s rich music history, with the documentary showing him visit a record shop and browsing records by New Order, the Smiths and Joy Division.

“There are several bands from Manchester who are among the best and they’re bands that are known worldwide but originate from here,” he added. “Music is life, it can change your mood.”