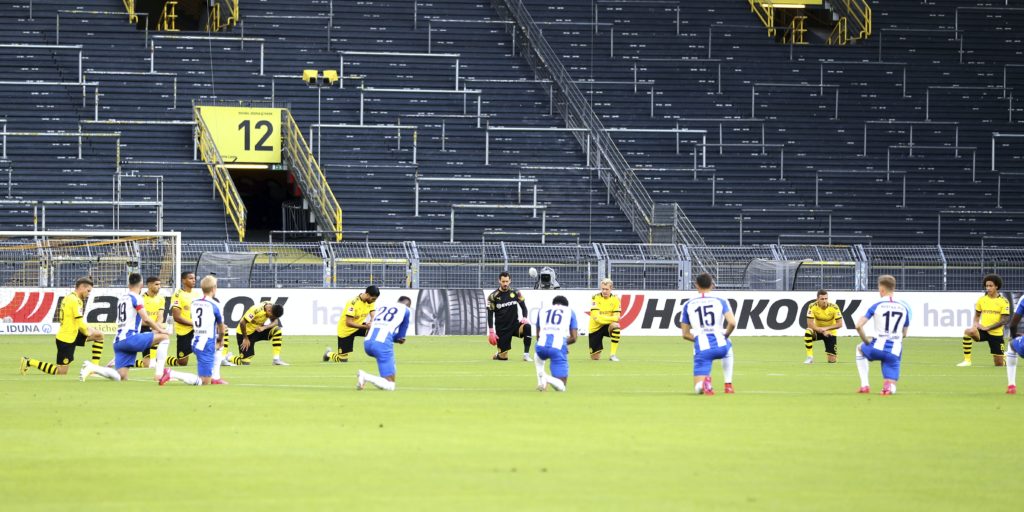 Bayern Munich moved closer to an eighth successive Bundesliga title and joined a number of clubs in demonstrating their support for the Black Lives Matter movement on Saturday afternoon.

Players from the Bavarian club wore T-shirts saying ‘Rot Gegen Rassismus’ which translates to ‘Red Against Racism’ as they warmed up prior to a 4-2 win at Bayer Leverkusen.

The Bayern players also wore armbands with the message ‘Black Lives Matter’ during the game, where goals for Kingsley Coman, Leon Goretzka, Serge Gnabry and Robert Lewandowski handed them victory at the BayArena.

Lucas Alario gave the hosts a ninth minute lead before Bayern put their foot on the gas, with the hosts’ 17-year-old Florian Wirtz pulling one back in the closing stages.

A 10th successive victory in all competitions keeps Bayern seven points clear at the top of the standings ahead of Borussia Dortmund, who beat Hertha Berlin 1-0 in a match where players from both sides knelt together around the centre circle before the match.

Dortmund players also warmed up for the encounter with T-shirts saying ‘No Justice, No Peace’ and ‘United Together’.

The German Football Association (DFB) announced earlier this week it would not penalise anyone campaigning against racism in the “coming match days” after several players last week paid tribute to George Floyd.

Floyd, an African-American, was killed in Minneapolis last week after a white police officer pressed his knee into his neck while in custody. Floyd’s death has sparked protests across the United States and the rest of the world.

England and Dortmund forward Jadon Sancho was among those who paid tribute to Floyd last week and he started against Hertha at Signal Iduna Park, where Emre Can’s 57th-minute goal was all that separated the sides.

Timo Werner, who is close to completing a deal to join Premier League side Chelsea, teed up Patrik Schick to open the scoring after 27 minutes but Dayot Upamecano saw red just before half-time for Leipzig.

It seemed the hosts would prevail with 10 men but Strohdiek struck two minutes into added-on time to earn Paderborn a point.

Rouwen Hennings scored in each half to secure a 2-2 draw for Fortuna Dusseldorf at home to 10-man Hoffenheim.

The visitors fell behind and were then a man down after captain Benjamin Huebner was sent off inside the opening 10 minutes but Moanes Dabbur levelled shortly afterwards, then Steven Zuber put them ahead after the hour mark.

With 14 minutes remaining, Hennings scored a penalty as the sides settled for an entertaining draw.

Goals in the 43rd and 77th minutes from Moussa Niakhate and substitute Pierre Kunde respectively sealed a 2-0 win for Mainz at local rivals Eintracht Frankfurt – a success which improves the visitors’ survival hopes.