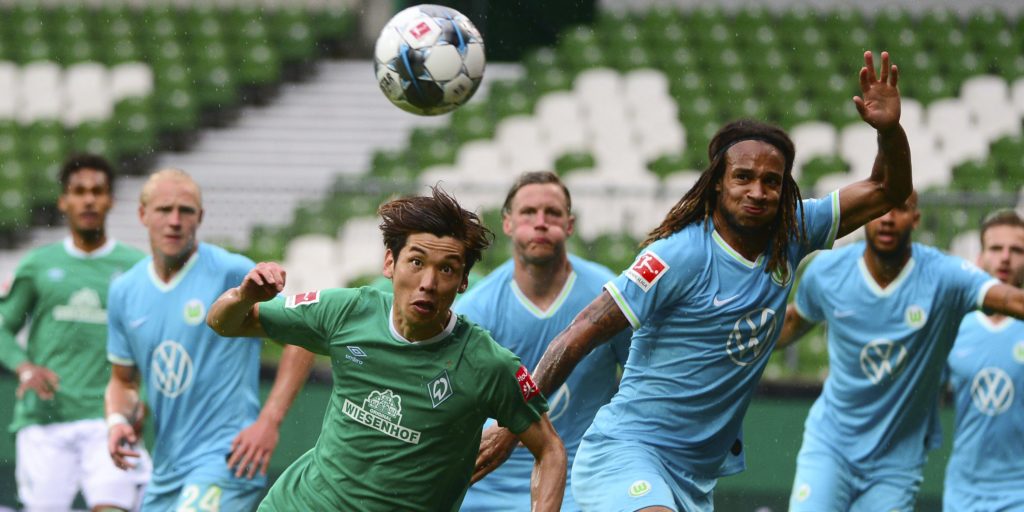 Werder are in a relegation dogfight.

Wout Weghorst grabbed an 82nd-minute winner as Wolfsburg boosted their hopes of qualifying for next season’s Europa League with a 1-0 victory at Werder Bremen.

Weghorst headed home to complete a counter-attack sparked by Kevin Mbabu, leaving the home side languishing second from bottom of the Bundesliga and closer to relegation.

Weghorst failed to make the most of an early chance for the visitors, while Wolfsburg goalkeeper Koen Casteels saved well from Yuya Osako midway through the first half.

Xaver Schlager hit the woodwork for Wolfsburg, before Weghorst’s goal left Bremen in desperate need of points when they travel to bottom club Paderborn next Saturday.

Philipp Max struck late on to grab a precious point for struggling Augsburg in a dramatic finish to their clash with Cologne at the WWK Arena.

Anthony Modeste looked to have claimed the visitors a first win in six Bundesliga games when he broke the deadlock moments after coming on as a substitute in the 85th minute.

But three minutes later Max scored his eighth and potentially most important goal of the season when he volleyed home a Raphael Framberger cross to secure a 1-1 draw and nudge his side four points clear of the bottom three.

Everton loanee Jonjoe Kenny fired a 25th-minute equaliser as mid-table Schalke, without a win in 12 league games, claimed a 1-1 draw at Union Berlin.

Robert Andrich had given the home side an 11th-minute lead but Kenny let fly to beat Berlin keeper Rafal Gikiewicz for his second league goal of the season.