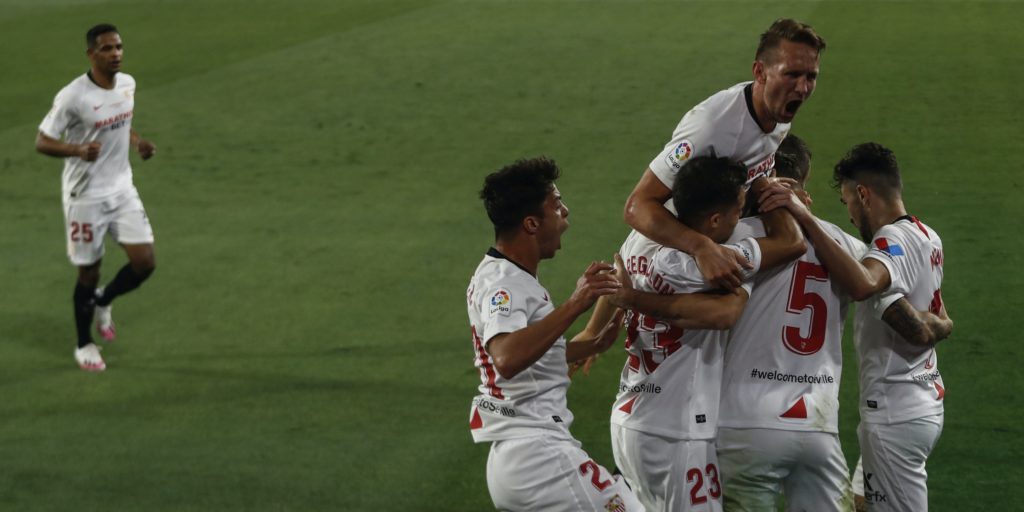 The Seville derby was the first top-flight Spanish game to be played since the shutdown.

Sevilla claimed a 2-0 victory over city rivals Real Betis to strengthen their Champions League hopes as LaLiga returned to action amid the coronavirus pandemic on Thursday night.

Strict social distancing measures were in place behind the closed doors of the Ramon Sanchez-Pizjuan stadium, though viewers at home might not immediately have realised as the broadcast was enhanced with a virtual crowd and fan noise.

Things were certainly looking familiar on the pitch as Sevilla strengthened their grip on third place with a professional performance.

They had Betis on the back foot early on, with Ocampos striking the outside of the post after 10 minutes with a powerful shot after good work to create the angle.

Jules Kounde then headed narrowly wide from a corner before Luuk De Jong wasted some fine work from Munir El Haddadi with a tame header that went harmlessly wide.

The second half started in the same vein, with Jesus Navas’ cutback creating a glorious chance which Joan Jordan somehow squandered as he mistimed his shot.

The pressure was building and told when Sevilla won a slightly soft penalty – Marc Bartra punished for an elbow in the back of De Jong – and Ocampos sent Joel Robles the wrong way before those social distancing rules were forgotten in the celebration.

With the deadlock broken, Sevilla doubled their lead six minutes later when Ocampos flicked on Jordan’s corner for Fernando to head home.

Betis improved markedly after the introduction of Joaquin off the bench, but rarely looked like getting back into the game with Sevilla in firm control.