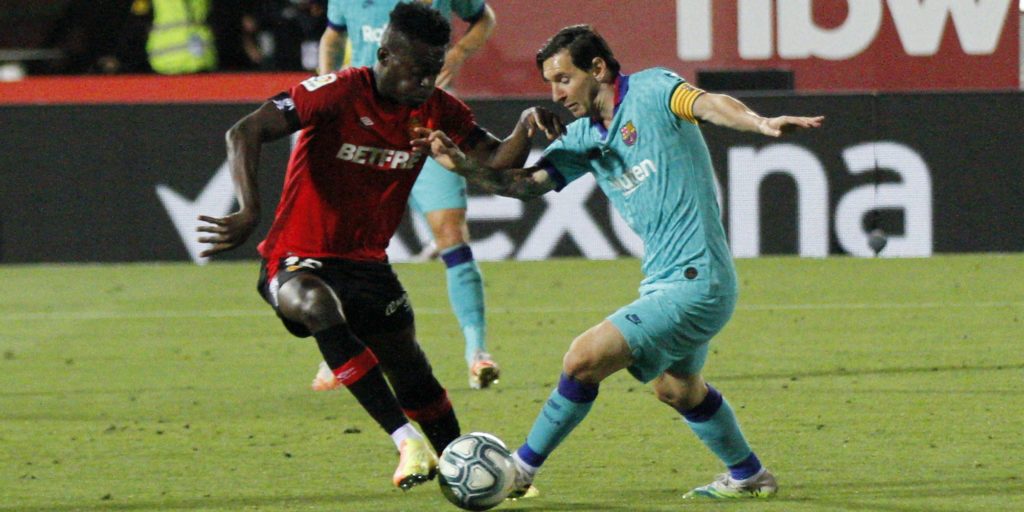 The Argentinian grabbed two assists and rounded off the scoring on the Balearic Island to move Barcelona five points clear of Real Madrid.

Barcelona hit the ground running as they cruised past Mallorca 4-0 in their first LaLiga game since the coronavirus pandemic.

The league leaders last played 99 days ago when they beat Real Sociedad 1-0, with the Spanish league suspended soon after because of the health crisis.

But it did not take them long to find their groove as goals from Arturo Vidal, Martin Braithwaite, Jordi Alba and Lionel Messi gave them the points on the Balearic Island and moved them five points ahead of Real Madrid in second.

In fact, it took just 65 seconds for them to make a mark as they enjoyed a dream start at an empty Son Moix stadium.

Alba whipped in a perfect cross from the left and Vidal got there first and powered a low header into the back of the net.

That left any gameplan Mallorca may have had in tatters as Barca took control of the game.

But they had to wait until the 37th minute to make their dominance count as Braithwaite opened his account for the club.

The former Middlesbrough striker joined Barca in February in a controversial move from Leganes had failed to score in his first three games but found the net in style, with a clinical finish after Messi had teed him up with a header.

The game was delayed in the second half, as an intruder in the stadium managed to get past security and on to the pitch before being taken away.

Messi may look different after the three-month break, having shaved his beard off, but not much else has changed as a brilliant through-ball set Alba away for the third in the final 10 minutes.

The Argentinian then completed a productive evening in stoppage time with a trademark jinking run and pinpoint finish into the top corner.