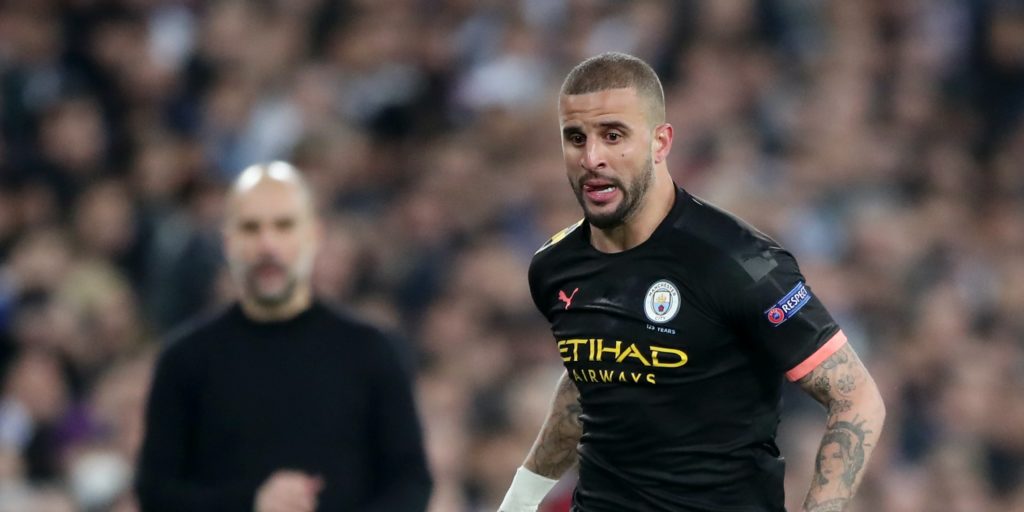 Cuty full-back Kyle Walker was forced to issue an apology in April after reports that he had hosted a party at his home.

Pep Guardiola will not hold Kyle Walker’s lockdown indiscretions against him when the Premier League resumes, with the Manchester City manager saying he judges his players by what they do on the pitch.

After a long coronavirus suspension, the English top-flight returns behind closed doors on Wednesday as Aston Villa host Sheffield United before City step out at the Etihad Stadium.

Among the team issues heading into the resumption of play appeared to be the availability of Walker, who was forced to issue an apology in April after reports that he had hosted a party at his home.

The City right-back claimed that he was being “harassed” the following month after admitting that he breached lockdown rules to visit his sister and parents – issues that Guardiola says will not impact his selection.

“I judge my players on what happens on the pitch,” he said.

“I think Kyle made a brave statement about what happened in this period and the club spoke with him.

“What I want is the best for him, especially his family – his wife, kids, parents. That is what we want.

“The human being always goes first, then the football player and I think Kyle expressed his thoughts in his statement.”

There were plenty of topics broached during Guardiola’s first press conference since play was suspended in mid-March – a difficult period in which his mother Dolors Sala Carrio died after contracting Covid-19.

“(I am) happy to come back to routine and see you guys,” he said at the start of his virtual press conference.

“How I live personally is the same like everyone I think lives, so it was nothing different, nothing special of course.

“All the people lost are important to our families, our real friends, so it was a difficult time.

“But that’s why we have the family – to be together, to stay strong with all of us.”

The Spaniard made a full recovery and intends to share a glass of wine with his compatriot on Wednesday, having done battle for the first time since Arteta left his role as Guardiola’s assistant to take the Emirates Stadium hotseat.

“I’m excited for the fact to see him again – one of the nicest people I have ever met,” the City boss said.

“It was a joy for me, I think for all of us to work with him. The feeling I have is he is happy there and doing an incredible job, so (I am) looking forward to seeing him tomorrow.”

Asked when he last spoke to his compatriot, Guardiola said: “We send a message one hour and a half ago!

“It was about the wine we are going to drink after the game, if the social distance allows us to drink it.”

Guardiola was in good spirits ahead of the resumption of action, but his frustration at the rapid return to action was clear.

“They came back really well, so we don’t have absolutely any complaints,” the City manager said.

“Tomorrow we will see how is the level of the team and from there we are going to see how we will do better.

“We were worried with these three weeks, with the incredible lack of preparation, not like for example in Spain or Germany, where they worked for five or six weeks.

“All the teams in the Premier League have just maybe three weeks or three-and-a-half weeks. Of course, we know it’s not enough but it is what is.

“I think all the people with their own business, in restaurants, in the shops – whatever they have, they have to adapt.

“Everyone has suffered this situation, personally and economically, and we have to adapt. As quick as possible would be better.

“They are training good but I don’t know exactly their physical condition and how many minutes they will be in the high level, but I think this is going to happen with all the teams in the Premier League.”