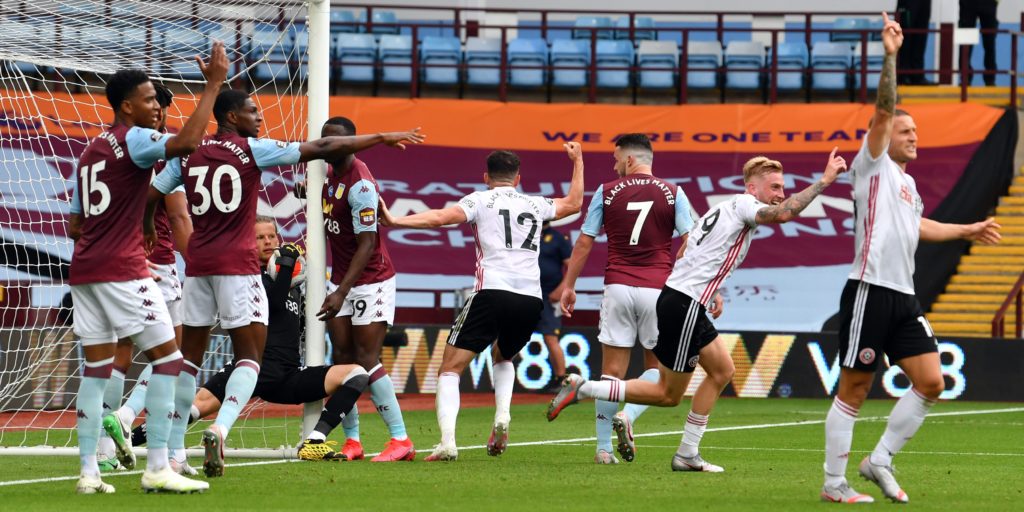 The Blades were denied a winner after goal-line technology caused controversy at Villa Park.

It ensured the Premier League returned for the first time in three months mired in controversy after the coronavirus pandemic halted sport in March.

Hawk-Eye, the company which runs the technology apologised for the error and explained the post and defenders on the line obscured the cameras, and Wilder felt sorry for Oliver and fourth official Chris Kavanagh.

He said: “You are expecting that decision to go to Stockley Park (the VAR base). It just happened quickly, I feel really sorry for the two main actors in it, Chris Kavanaugh and Michael Oliver.

“We can’t put all our eggs in one basket and possibly buy a dodgy watch from a market.

“There’s a word I often use which I can’t use but someone had to have the guts to make that decision at Stockley Park. It should be made but it wasn’t.

“This goes right to the top of the pile of poor decisions which have been made this season by the whole process of technology.”

Villa failed to escape the bottom three and now do not have a game in hand on their relegation rivals.

They host Chelsea on Sunday as part of a daunting run-in where they also play Wolves, Arsenal, Manchester United, Liverpool and Everton in their final nine games.

But boss Dean Smith was happy with his side’s performance as they get used to playing behind-closed-doors.

“It’s different. It’s not the buzz that you get from having the supporters here, but you’re emotionally attached all the same,” he said, with Villa only a point from safety.

“We know we need more performances like that to stay in this league. I said I wanted to make the supporters proud and hopefully they were watching today and seen the work we’ve been doing over the last 14 weeks.

“I want to be a different Aston Villa team for this final 10-game tournament.”