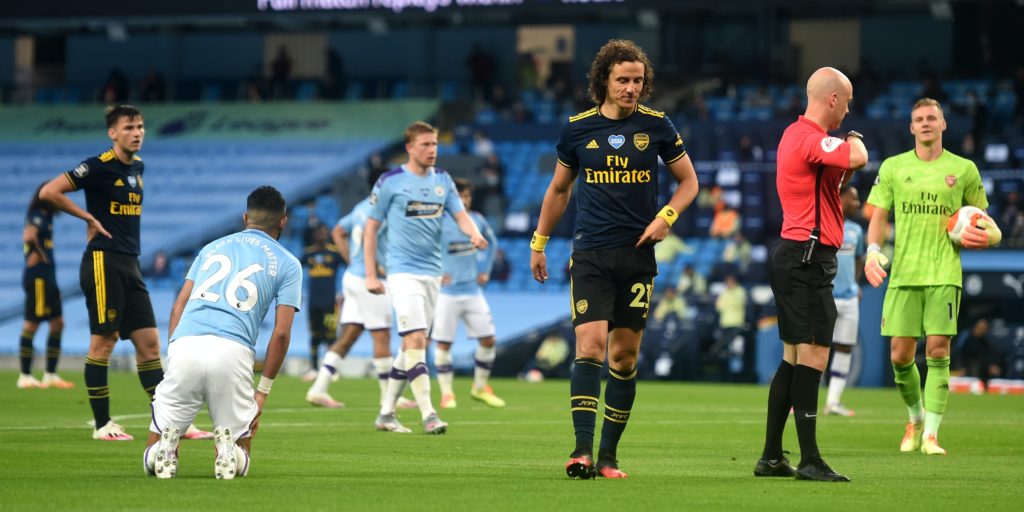 Raheem Sterling, Kevin De Bruyne and Phil Foden netted for the hosts at the Etihad Stadium.

After ‘Project Restart’ began with a scoreless draw between Aston Villa and Sheffield United, there was plenty to talk about as the Etihad Stadium witnessed the first Premier League goals in 100 days.

City emerged 3-0 victors against Arsenal in front of empty stands as Pep Guardiola comfortably overcame former assistant Mikel Arteta, who saw substitute Luiz unravel as he gave away goals either side of half-time and got sent off.

The result meant Jurgen Klopp’s men cannot seal the title at Everton this weekend, even though it remains a matter of when rather than if the Premier League trophy leaves the Etihad Stadium for Anfield.

Luiz’s disastrous display came on a night of three serious-looking injuries, with the Brazilian replacing Pablo Mari in a match book-ended by Granit Xhaka and Eric Garcia leaving on a stretcher.

The Brazil international may well have wished he stayed on the padded, social-distanced bench after undoing Bernd Leno’s good work by failing to deal with a ball that Raheem Sterling fired home late in the first half.

Things got worse for Luiz shortly after the restart. After receiving a red card for bringing down Riyad Mahrez in the box, Kevin De Bruyne slotted home the spot-kick and substitute Phil Foden scored in stoppage-time to rub salt into Arsenal’s wounds.

This was football but not how we knew it in March. Social distancing was in operation as the top-flight resumed amid the pandemic, with the stadium split into zones, hygiene stations dotted everywhere and banners replacing fans in the stands.

It was a surreal experience inside the Etihad Stadium, where the 300-or-so in attendance fell silent before kick-off to remember City great Glyn Pardoe and those impacted by Covid-19.

It was a poignant moment followed by another as every player took a knee in a show of solidarity on a night when ‘Black Lives Matter’ replaced the names on the back of all their shirts.

Every challenge, save and coaching cry could be heard loud and clear when play got under way in the north west, where injuries outnumbered clear-cut chances in the early stages.

After De Bruyne’s free-kick was saved by Leno, the other notable moments of the opening 25 minutes were Xhaka leaving on a stretcher and Mari limping off as ‘how does it feel?’ echoed around the ground during a drinks break.

Luiz replaced him and quickly played a fine ball over the top to Eddie Nketiah, only for Garcia to get away with hauling him down.

That let-off appeared to jolt City into life and Leno had to be at his best to keep the home side at bay, first denying Sterling and then superbly getting down to his left to thwart David Silva.

Leno spread himself when Mahrez was put through by the ever-excellent De Bruyne, who was in the groove and soon played in Sterling for another chance.

The half looked set to end goalless when the City forward lifted that ball over the goalframe and goalkeeper, but he struck in stoppage-time after Luiz failed to deal with De Bruyne’s ball.

City players appeared to forget about social distancing during the celebrations.

Luiz’s evening would go from bad to worse minutes into the second half, bringing down Mahrez in the box as referee Anthony Taylor pointed to the spot and brandished a red card.

The video assistant referee cleared the decision and De Bruyne coolly beat Leno – a gut punch Arsenal were never going to be able to respond to.

De Bruyne and Ilkay Gundogan were denied but the tempo had dropped markedly as the sides made five changes apiece.

There was a horrid thump when Ederson clattered Garcia, leading medics to dart onto the field and tend to the young defender.

Shortly after 11 minutes of added time was announced, City capped a comprehensive win as Foden directed into an empty net after fellow substitute Sergio Aguero hit the woodwork.