Football strikes the right tone on return amid strange surroundings 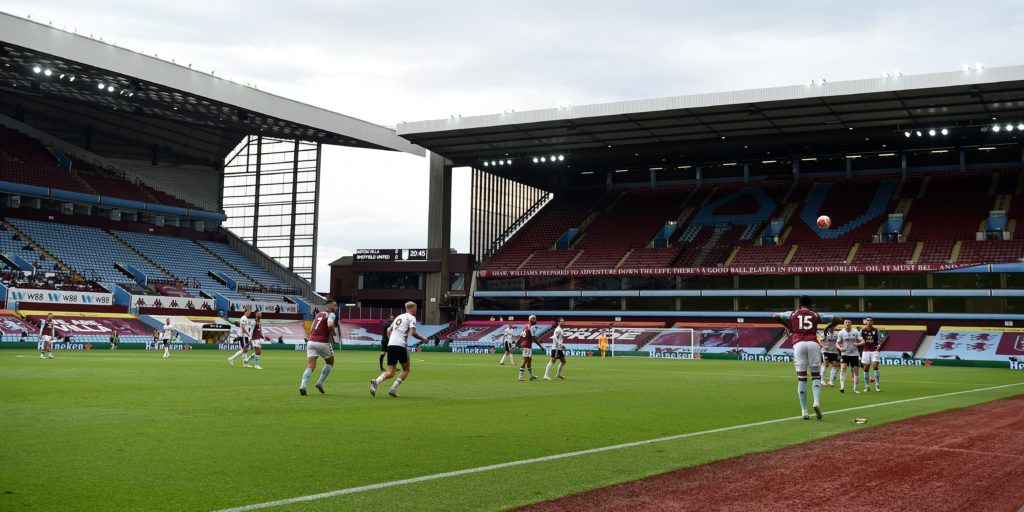 Football is back but not as you knew it.

The Premier League returned with striking images for something that used to be so normal.

Football resumed as the country tries to restart yet there were constant reminders the scene was anything but routine.

An unmistakable picture was set immediately as Aston Villa, Sheffield United and officials took a knee in support of the Black Lives Matter movement before kick off.

It came after they also respectfully remembered the victims of the coronavirus pandemic.

Football is taking centre stage in the recovery from the pandemic and while it is often maligned for being self-centred, it struck the right tone.

Villa and the Blades had the ‘honour’ of restarting the division on Wednesday after the devastating effects of the last few months.

It may have been behind-closed-doors but there was no shortage of controversy as Orjan Nyland clearly carried Oliver Norwood’s first-half free kick over the line – with goal line technology failing to signal a goal.

Off the pitch it was a different scene, no wide-eye fans waiting to see their heroes and – possibly thankfully – no half-and-half scarves being pitched on the surrounding streets.

A curtain-raiser to an empty theatre – even with the millions watching at home – is not the image the world’s richest league wants to project but in a time of crisis, needs must.

Temperature checks and face masks were mandatory while there was no entry without a completed health form.

The media who covered Wolves’ behind-closed-doors Europa League trip to Olympiacos in March – or indeed any of the last games to be played before the pandemic silenced sport – knew what expect.

Then, there were no normal facilities open to the media – no press conference or press room – and you were spaced out from your written colleagues during the game.

The only suggestion of a game in Athens was a group of fans playing football outside the club shop and a number of police ensuring no support was foolish enough to try to sneak in.

Now, in the aftermath of over 40,000 dying in England alone, outside was a ghost town.

Inside, you could barely go 20 yards without a bottle of hand sanitiser waiting for you with a one-way system painted on the ground.

The Blades came to warm up with the only applause coming from Oli McBurnie and the PA blared Ozzy Osbourne and the Premier League’s anthem to almost no-one.

Even after a period of silence to remember the victims of Covid-19 you still expected a roar from the crowd.

Then came a seminal moment as the teams – already wearing ‘Black Lives Matter’ instead of their names – sent a message of support by kneeling before the game.

For Villa, second bottom before kick off, their season is far from doomed but Dean Smith knew a lack of fans would harm Villa’s survival chances, such is the pull of the Holte End.

A tribute to his dad, Ron, who died after contracting coronavirus was prominent in the stand. The 79-year-old was a steward at Villa Park, taking the future manager to his first games, and an orange jacket sat in the middle of the empty rows.

The game itself lacked a goal – only because the technology failed – and a draw dented Villa’s survival hopes and the Blades’ European push.