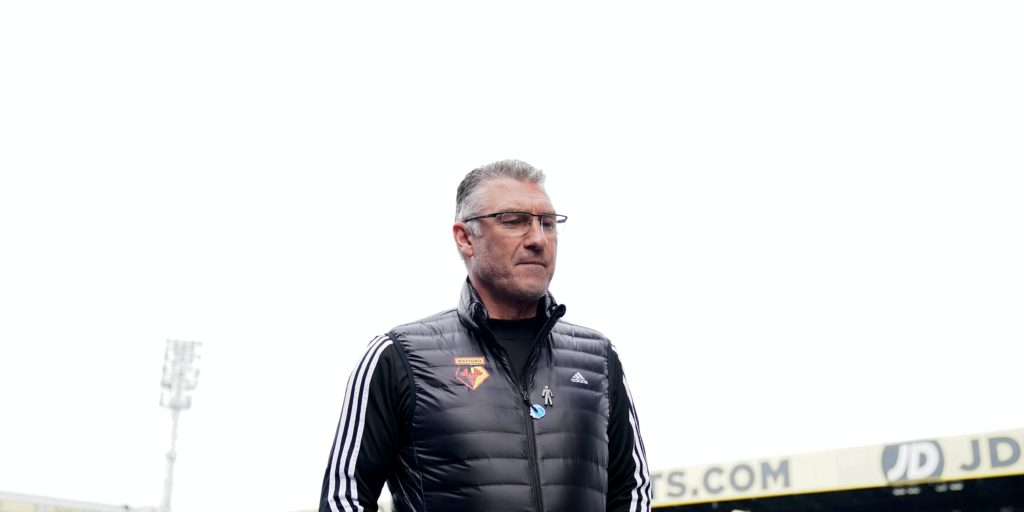 Watford boss does not want the Premier League to turn into an American comedy show.

Watford head coach Nigel Pearson does not want the Premier League to turn into an American sitcom and has called on his players to deal with the “sterile situation” of matches in front of empty stadiums as the club opt not to use fake crowd noise.

The Hornets return to action against Pearson’s former club Leicester in Saturday’s early kick-off, with the game at Vicarage Road taking place behind closed doors as the Premier League moves forward despite the coronavirus pandemic.

A 1-0 defeat at Crystal Palace in the last game before the postponement of the season leaves Watford 17th in the table and outside of the relegation zone by virtue of goal difference.

Some broadcasters are offering viewers the chance to listen to crowd noise during matches while Manchester City had a bank of screens showing live fan reaction to their 3-0 victory over Arsenal on Wednesday night.

But Pearson is not keen on the gimmicks and believes it will be up to his team to adjust to playing in empty stadiums as soon as possible as they battle against the drop.

“What we have got to do is just deal with the situation, our stadium will be the same as every other stadium – no supporters.

“But what we have got to do is try and negotiate this period while it is not possible (to have supporters) to keep our status in the Premier League.

“Hopefully our players will be able to isolate all the emotional side of it and deal with a sterile environment.

“We are not overly keen on it – I don’t know if you like American comedy shows, I can’t stand them with canned laughter – so we don’t intend to create an environment where there is a false atmosphere.

“We have to deal with our own situation and know that our fans are very much behind us.

“We know that anyway, we are a club that has an identity in the community and the way the club has supported that community during the pandemic has been very, very good.”

Clubs can use music during “trigger” moments in a game – goals, kick-offs and similar passages – while it cannot be pumped in the stadium while the ball is in play.

Watford trialled the use of chants over the public address system during a recent friendly with Brentford but goalkeeper Ben Foster revealed the players found it “really annoying” and they are now not expecting to utilise it against Leicester.

With Watford fighting to stay in the league as football returns, Pearson revealed his players are remaining positive.

“I’m delighted with how the players have both returned to training and embraced the need to get back to game situations as soon as possible given the circumstances we are working in,” he added.

“It is not about looking for negatives, we deal with the situation – we have to do everything we can to retain our Premier League status, that is the top and bottom of it – if you speak to the players and the mood in our camp, it has been very, very positive.”