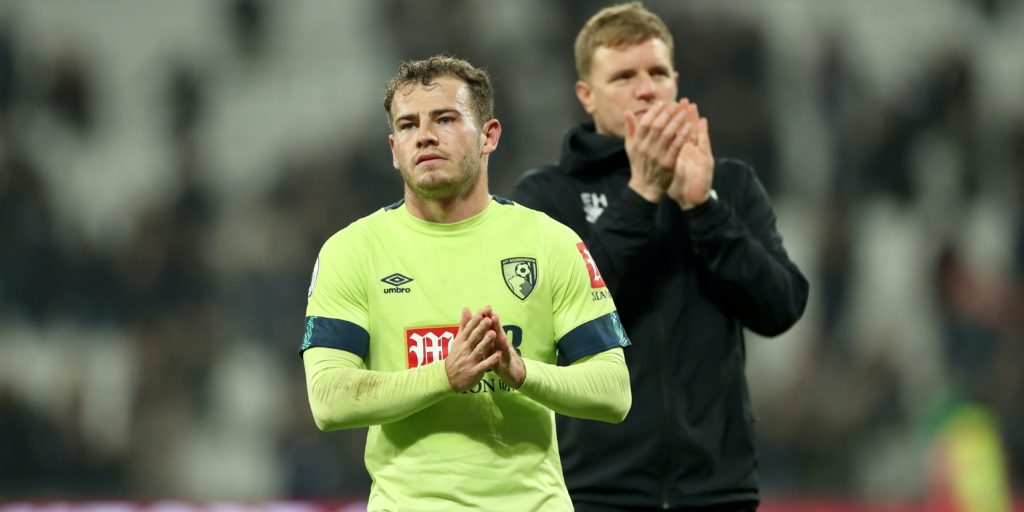 The winger joined the Cherries in January 2013.

Fraser, whose contract expires later this month, declined to sign a short-term extension to remain at the Vitality Stadium until the end of the prolonged Premier League season.

The 26-year-old will not be involved in Saturday’s home game against Crystal Palace or next week’s trip to Wolves as the 18th-placed Cherries scrap for survival.

Howe expressed regret at the circumstances of Fraser’s impending departure on a free transfer but wants to select players who are prepared to fight “tooth and nail” for the cause.

“I don’t think I was particularly surprised by his decision. I think it’s been clear to us as a club for some time that Ryan wasn’t going to sign a new contract with us,” Howe said at a press conference.

“He’s now played his last game for the football club, he won’t be involved with us for the last nine games.

“I only want players who are fully focused on the relegation battle that we have ahead and I’m looking forward to doing that with my squad.

“These are the most important games this football club has had in recent times and we need everybody in the same position mentally, fighting tooth and nail, giving everything for the football club and Ryan unfortunately, due to his contractual situation, can’t commit to that.”

Scotland international Fraser joined the Cherries from Aberdeen in January 2013 and made 208 appearances, scoring 24 times.

He won the supporters’ player of the year award for the 2018-19 campaign.

“He didn’t deserve this ending but circumstances have arose that has made this happen,” Howe added.

“I’m sad for him because he’s had a really good link with the supporters, they’ve really loved him in his time here.

“For it to end the way that it has done is uncomfortable for me, lots of sad emotions for me because it shouldn’t have ended like this.”

After a season blighted by injury, Howe believes the current squad at his disposal is the “strongest” he has been able to select from this term.

The enforced break in action caused by the coronavrius pandemic has allowed influential winger David Brooks additional time to recover from a long-term ankle problem.

Brooks has not appeared for the club for almost 14 months and Howe is optimistic the player’s overdue return will provide a significant boost.

“He’s looked very good in training so far, he’s overcome – touch wood – the ankle problem that he had,” said Howe.

“He’s got better and better as the training has gone on. In terms of his game involvement, that’s a difficult one to predict. Time will tell on that. Will he play every minute of every game? Probably not.

“Will he be able to hopefully contribute majorly to our fight against relegation? Hopefully, yes.”

Bournemouth spent lockdown in the bottom three after being beaten 2-1 at runaway leaders Liverpool before the suspension of play.

With constant speculation about how the season would be concluded, Howe feared his team could have been relegated without another ball being kicked.

“It was a big concern through lockdown – all the media stories that we were reading – that would it be taken out of our hands, would we lose our Premier League status with the season suspended,” he said.

“That was a big worry. I tried not to spend too much time focusing on things I couldn’t control. (I’m) very, very pleased to be back to football and the results will define our future long-term, not elsewhere.”