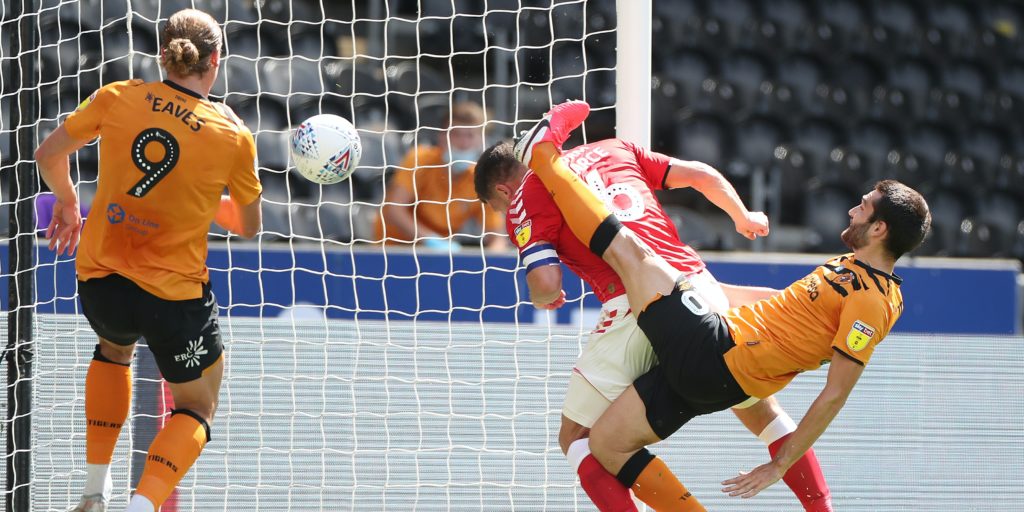 Grant McCann’s Tigers returned from the 15-week break directly above the drop zone.

Charlton claimed a huge win in the battle for Sky Bet Championship survival as Hull dropped into the relegation zone on an afternoon when Angus MacDonald made his return from bowel cancer.

Grant McCann’s Tigers returned from the 15-week break directly above the drop zone, with Lee Bowyer’s visitors just inside it and knowing they would have been consigned to relegation on a points-per-game had the season not restarted.

Both sides endured challenging lockdown periods and it was Hull’s task that became tougher at an empty KCOM Stadium, where captain Jason Pearce’s bundled effort sealed a 1-0 win for relegation rivals Charlton.

Neither team could really afford defeat on Saturday, when City centre-back MacDonald made his first start in 662 days having missed most of the last campaign with deep vein thrombosis before being diagnosed with bowel cancer at the start of the 2019/20 season.

The defender performed well on his return but the Tigers – who this week saw four players refuse to extend their deals beyond the end of the month and were the most vociferous club in their opposition to the season’s restart – failed to recover from a first-half gut punch.

Skipper Pearce turned home from a corner and Charlton held out for a crucial victory, despite the backdrop of top scorer Lyle Taylor refusing to play, speculation about Bowyer’s future and being under a third owner of a troubled season.

McCann’s men had started on the front foot at the KCOM Stadium, where Herbie Kane saw an early shot blocked before Jon Toral flicked a header wide from the on-loan Liverpool man’s corner.

Josh Bowler and Mallik Wilks, whose loan from Barnsley is set to expire at the end of the month, were proving an early handful, but Charlton finally settled and began to ask questions of Hull’s backline.

MacDonald produced a fine block to thwart Macauley Bonne and Aiden McGeady forced a flying save from Tigers goalkeeper George Long, who tipped behind for a corner that would result in the 18th minute breakthrough.

Hull have struggled with set pieces all season and Pearce bundled home a goal that his side went close to adding to shortly after when Adedeji Oshilaja’s cross fizzed across the face of the hosts’ goal.

Dan Batty saw a strike saved as McCann’s side meekly attempted to fightback, with Albie Morgan and Tomer Hemed attempting to punish that poor display as Charlton returned from half-time on top.

McCann made a raft of changes in a bid to change the game, but Hull met by firm resistance, with Bonne wasting a great chance to seal the victory.

Frustration was audibly increasing as the Tigers toiled, with Chuks Aneke brought on to stretch the hosts’ backline as Bowyer harangued the officials and his defence held firm for a much-needed Charlton victory.