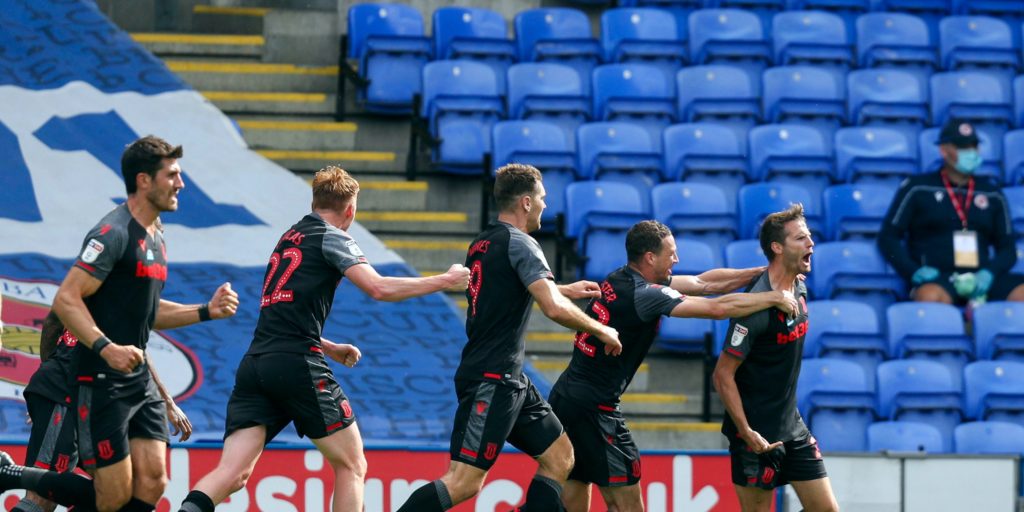 Lucas Joao had put the Royals ahead.

After a poor opening, Stoke went behind in the seventh minute when Reading striker Lucas Joao guided home smoothly from 10 yards.

Tyrese Campbell nearly levelled for the visitors with 20 minutes left but his deflected effort glanced off a post.

However, Powell struck in the second minute of stoppage time to give Stoke a point.

Stoke manager Michael O’Neill tested positive for coronavirus earlier this month but spent a period in self-isolation and he returned to training on Friday and was present in the dugout at Madejski Stadium.

Before the lockdown, Stoke were on an unbeaten run of four matches, including a 5-1 home victory over Hull last time out but they were still hovering just three points above the relegation zone.

Before kick off, a minute’s applause was held in tribute to the NHS frontline workers.

Also, players and staff from both clubs and the match officials “took a knee” in support of the Black Lives Matter movement.

At a near-empty Madejski, as per the virus protocols, O’Neill’s side made a sluggish start.

Stoke goalkeeper Jack Butland comfortably saved a clever flick from Joao, from an Omar Richards cross, but was beaten soon after.

Yakou Meite drove in from the right and his low centre was turned in by Joao with a precise first-time finish.

It was his first appearance since New Year’s Day – after recovering from a long-term hamstring problem – and his sixth strike for Reading this season.

The Portuguese striker also scored a goal for Sheffield Wednesday – against Reading – back in August before moving to the Berkshire club.

Stoke struggled to make headway, despite enjoying much of the possession, but could have equalised in the 16th minute.

Winger Ince found space at the far post only to direct a weak effort into the arms of home keeper Rafael.

Reading responded through impressive midfielder Michael Olise, who forced Butland into a fine save from his powerful 20-yard drive.

Joao went off injured before half time, during which O’Neill decided to bring on substitutes James McClean and Danny Batth.

Stoke almost went further behind when Swift’s sweetly struck free-kick from just outside the area thumped against Butland’s bar.

However, Stoke did get their reward when Powell headed home from close range from James Chester’s nod-down.