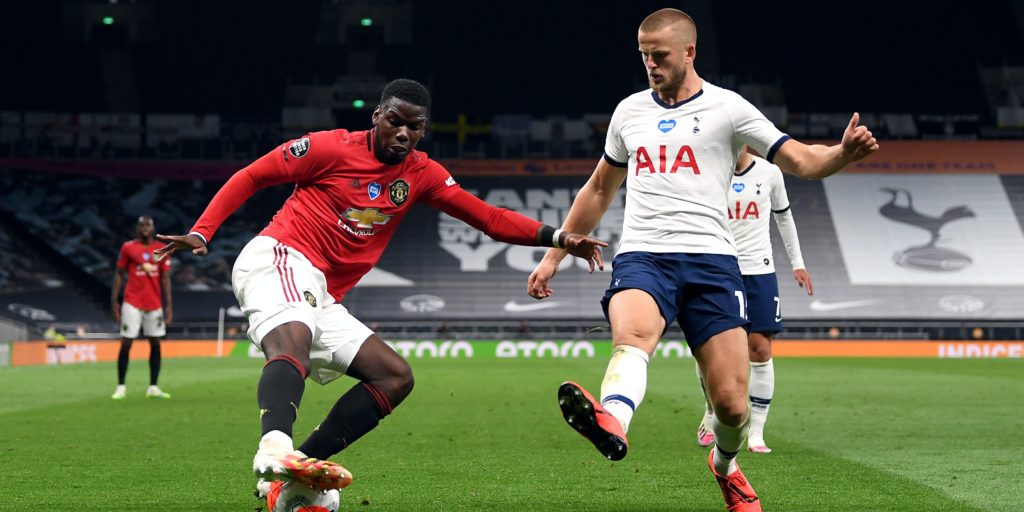 The Frenchman made his first appearance since December in the 1-1 draw at Tottenham on Friday night.

The Frenchman came on just after the hour in his side’s Premier League resumption in north London to make a first appearance since December following an injury nightmare.

He made a big impact, earning the 81st-minute penalty with a sublime piece of skill that allowed Bruno Fernandes to score and cancel out Steven Bergwijn’s opener for Spurs.

“I told him afterwards how much of a difference he made,” Shaw said on the club website. “He didn’t play for that long but obviously it’s great to have him and Rashy [Marcus Rashford] back in the side.

“They are very important players and maybe we can see Paul from the start on Wednesday.”

The point was the least United deserved as they pressurised a compact and pragmatic Spurs in the second half.

Jose Mourinho’s side also flagged physically and Shaw was happy with United’s fitness.

“We felt fit, we felt stronger than them and we felt like they were struggling at times. We kept going and got the penalty,” he added.

“I feel great. The break came at a difficult time as we were flying, but everyone’s worked really hard and kept in great shape over the period we had off. We’ve come back flying.

“We need to push on from here. The [unbeaten] run keeps going but we need to take away the draws and get the wins instead because that’s the most important thing.”

Despite having Harry Kane, Son Heung-min and Bergwijn back in his attacking ranks, Mourinho was without the suspended Dele Alli and the injured Lucas Moura.

The Portuguese has been unable to choose from a full complement of players in his time at the club, but hopes that will change against West Ham on Tuesday.

He said: “My feeling tells me that when we play in our maximum power, which didn’t happen since I arrive because we didn’t have Hugo Lloris, then we lost Harry and then we lost Moussa (Sissoko), we’re a strong team.

“And today we thought we could be at the maximum of our potential but then you have Dele suspension and Lucas injury.

“The five changes of course was a request by the powerful squads, a request made by a top team with top options on the bench and was followed by some teams in the same circumstances. It’s very, very important at this moment for teams.

“I think against West Ham in the next match if everything goes well, I expect to have two attacking players on the bench that can give me the opportunity to change the intensity when the intensity goes down.”