Home News Rhian Brewster at the double to down Middlesbrough

Rhian Brewster at the double to down Middlesbrough 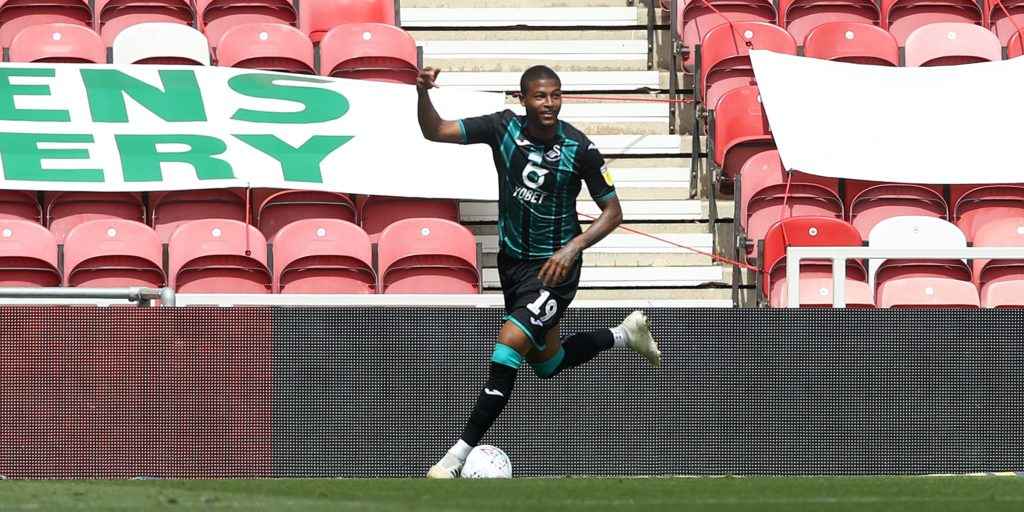 The Swansea striker scored twice inside three first-half minutes and also unveiled a T-shirt bearing the message: “Our colour is not a crime.”

Rhian Brewster sent out a powerful anti-racism message as he helped to fire Swansea to a comfortable Sky Bet Championship victory at Middlesbrough.

The 20-year-old Liverpool loanee struck twice inside three first-half minutes, unveiling a T-shirt bearing the message “Our colour is not a crime” while celebrating the first, as the Swans ran out 3-0 winners at the Riverside Stadium on their return to action.

Andre Ayew wrapped up a win which keeps the Welsh side firmly in the race for the play-offs with a 34th-minute penalty on a day when struggling Boro, who have won only twice in the league since the turn of the year, simply gave themselves too much to do with a dreadful start.

The home side enjoyed an early escape when defender George Friend slipped as he turned to pursue Brewster’s seventh-minute ball over the top.

Midfielder Aldo Kalulu was left with a clear run on goal, but his chipped effort eluded keeper Dejan Stojanovic only to come back off the upright.

The visitors were denied by the woodwork once again with 15 minutes gone when Brewster met Conor Gallagher’s knock-down from an Ayew cross, but could only find the outside of the other post from point-blank range.

However, they went ahead within three minutes when Ayew slipped in behind right-back Jonny Howson once again and crossed for Brewster to side-foot home.

The England Under-21 international doubled his tally with just 21 minutes gone with a scuffed volley from Kalulu’s right-wing cross to leave the Teessiders in deep trouble, and their plight worsened before the break when Ayew converted from the spot after Gallagher had been tripped by Friend.

Friend and Rudy Gestede both headed wide from Paddy McNair corners as Boro attempted to grasp a lifeline, but they remained a distant second-best as the half-time whistle sounded.

Head coach Jonathan Woodgate replaced Ryan Shotton and Adam Clayton with Djed Spence and Patrick Roberts for the restart and switched from four to three at the back, and his side instantly looked more comfortable.

Gestede powered a 53rd-minute header wide and with wide-man Marvin Johnson having also been introduced, the home side belatedly started to pose a threat.

Midfielder Lewis Wing curled just wide from distance on the hour with Boro enjoying their best spell of the game, although even the arrival of frontmen Ashley Fletcher and Britt Assombalonga could not change the result with Swansea substitute George Byers ratting a post at the death.