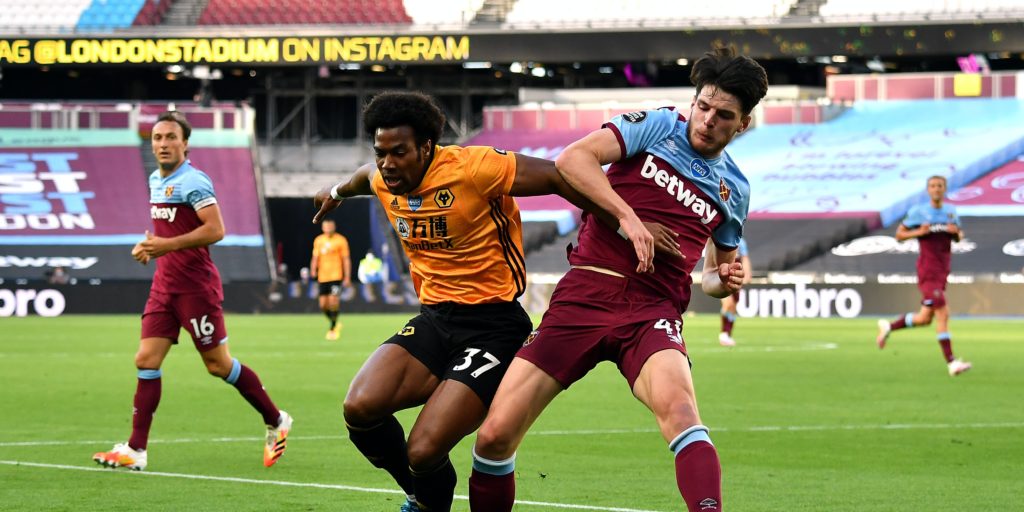 Rice played in defence against Wolves.

Declan Rice has vowed to be a leader on the pitch as he attempts to help guide West Ham away from relegation trouble.

England midfielder Rice filled in at centre-half against Wolves on Saturday but despite a solid display he could not prevent the Hammers slipping to a 2-0 defeat.

“I felt comfortable,” he said. “As has been said before, it’s a position I’ve played before and when the gaffer pulled me during the week and said he wants me to play there, there were no questions asked – I’d go back there and do a job for the team.

“I tried my best and tried to impose that. When I play at the back I can see the whole game. I’ve got to be a leader and I’ve got to talk because I can see everything that’s going on.

“If I keep my mouth shut the other players wouldn’t know what’s going on, so that’s what I do – I speak to the players and try to encourage them.

“We went 1-0 down and we’ve got to keep our heads up and push each other on, to give us the spurt to maybe go on and get a goal.

“It didn’t happen, but I’ll keep talking to them in every game.”

Adama Traore’s second-half introduction swung a tight match in Wolves’ favour, the winger having a hand in late goals for Raul Jimenez and Pedro Neto.

The Hammers now face a trip to Tottenham on Tuesday evening before another derby against Chelsea next weekend.

“In the position we’re in we can’t be dropping points,” added Rice. “We need to lift our heads up for Tuesday.

“Obviously the goals are sloppy. Traore came on and they were two great crosses, but we’ve got to deal with them. We were happy with our performance until then, but we need to be better. “

Wolves are now on the brink of the Champions League places and manager Nuno Espirito Santo said: “We have eight games to go.

“The next one is Bournemouth at home, and it will be tough. We have to rest, recover and prepare well.”