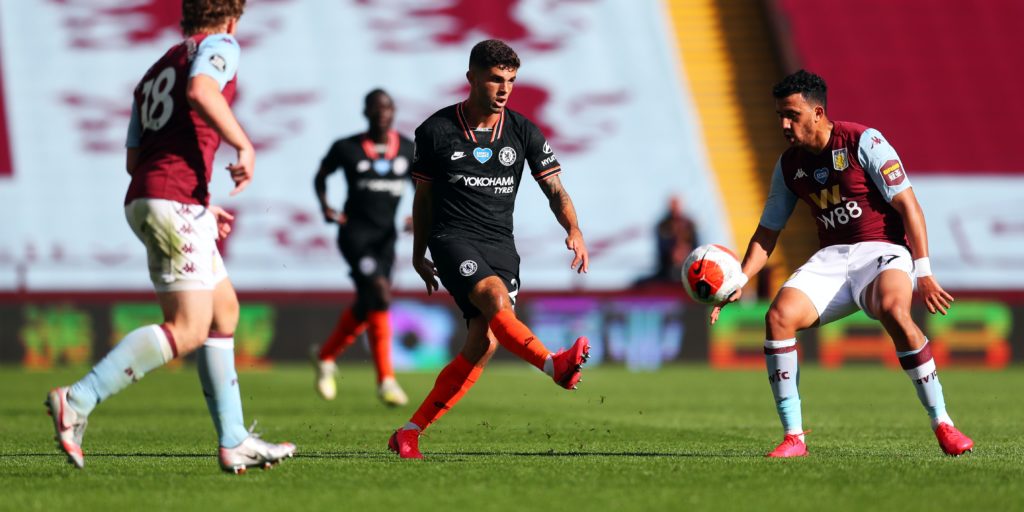 Boss Frank Lampard has backed Christian Pulisic to make the difference in the race for top four after Chelsea’s comeback win at Aston Villa.

Forward Pulisic and Olivier Giroud turned the game around in 121 seconds after the break as the visitors survived a scare to secure a 2-1 win.

Chelsea dominated only to fall behind to Kortney Hause’s opener just before half time on Sunday.

They recovered to cement their position in fourth, moving five points ahead of Manchester United and Wolves.

It was Pulisic’s first appearance since January after an abductor muscle injury and Lampard feels the USA international is ready to make an impact again.

“He will start games for us, of course, and I think he’s going to be a big player for us, not just in this run-in but going forward,” he said, after his 100th game as a manager.

“He was hungry. I know that and I felt for him, as I felt for the players with long-term injuries.

“The ability he’s got to arrive in the box, it’s a big thing, I’ve spoken about it with him all season.

“It’s the difference between being a very good player off the side, an attacking player, or the players at the real top level of the game that arrive and score in the six-yard box and hit numbers yearly.

“I really think Christian can do that, so I was really pleased with him, the impact he made when he came on.”

Chelsea dominated from the start and Orjan Nyland parried Mason Mount’s drive but they went into the break 1-0 behind after Hause bundled in following Kepa Arrizabalaga fine saved from Anwar El Ghazi.

Pulisic was introduced 10 minutes into the second half and five minutes later the USA international equalised, firing in Cesar Azpilicueta’s cross from close range.

Azpilicueta then created the winner for Giroud almost instantly and the striker was given time to turn, with his 12-yard shot deflecting beyond Nyland.

Jota could have levelled with two minutes left but fired wide to leave Villa second bottom.

Boss Dean Smith said: “The two games we’ve played at home the players have been in the zone. We should have won the first game and today we have come up against a top-four Premier League side.

“Unfortunately a little bit of quality and fortune favoured them. The thing we have worked on during the pause is being tougher to beat and we have become that.

“People who saw that will know how hard Chelsea had to work to break us down. It won’t be doom and gloom even though it’s a big disappointment.

“We conceded two goals in two minutes and there was a little bit of luck for both of them.

“The second one was the more frustrating one, the ball was pulled back through Douglas Luiz’s legs and we have bodies in the box but it takes a big deflection off Conor Hourihane.”