Home News John Egan dismissal frustrates Chris Wilder, who says he must pick his Blades up

John Egan dismissal frustrates Chris Wilder, who says he must pick his Blades up 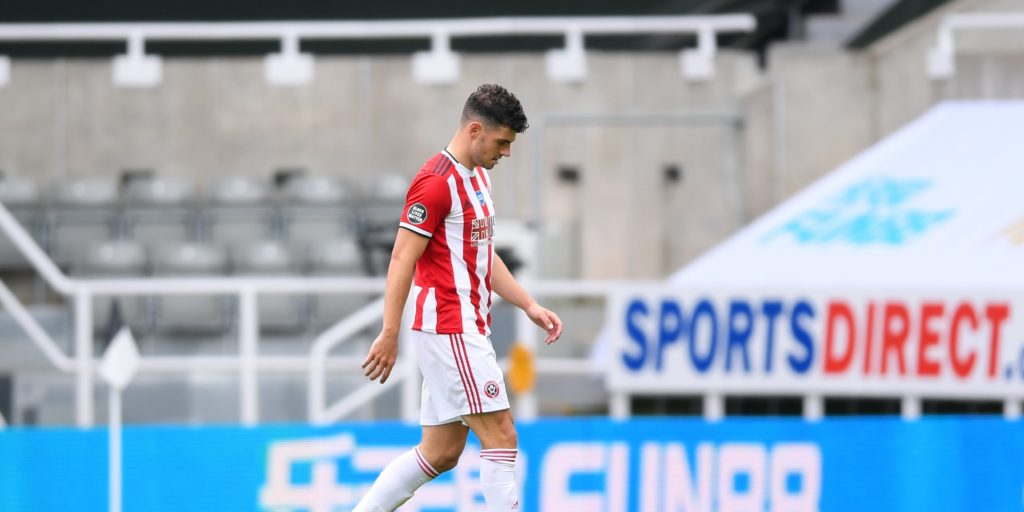 Sheffield United boss Chris Wilder was unhappy with the first of John Egan’s yellow cards as the defender was dismissed in defeat at Newcastle.

The Blades suffered their biggest defeat of the season as they capitulated following Egan’s sending off on 50 minutes, with Newcastle winning 3-0.

Allan Saint-Maximin scored just five minutes after the red card following an error from Enda Stevens, with Matt Ritchie doubling the lead and Joelinton scoring just his second league goal of the season to wrap things up.

Speaking after the game, Wilder questioned the decision to show Egan a yellow card in the first half following an altercation with Joelinton, which also saw the Brazil striker cautioned.

“I’m so glad that I’m not playing in today’s game if you’re getting booked for that,” Wilder told Sky Sports.

“Just two boys going head to head. He obviously produced two yellow cards and it is easier for the centre-forward than the centre-half.

“The second one, I have no complaints with. I’ve got to pick the players up, I didn’t like the feeling when we went two down.”

“(The first yellow) was a little bit (of) handbags,” he said.

“I don’t think either of them deserved a yellow card but I can understand how Chris must feel.

“The second one was a yellow, it could have been a red maybe. The big decisions in big games, you need them to go for you.”

Speaking about Joelinton, who had not scored in the league since August following his big-money move to Tyneside, Bruce was delighted the striker was back among the goals.

“We know he has had a tough time, the whole thing about coming to England. He has been in lockdown on his own for months with no-one with him.

“He has still got a lot to do but a GBP 40million price tag (and being) Newcastle’s number nine is a lot on him – it (the goal) is a boost.”