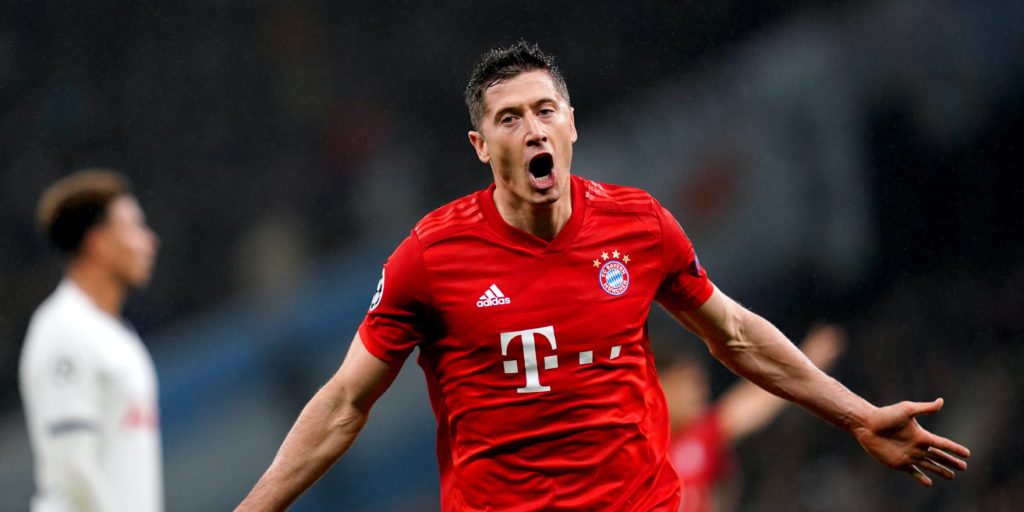 The Bayern Munich striker scored his 32nd and 33rd goals of the season.

Robert Lewandowski became the most prolific foreign goalscorer in Bundesliga history as Bayern Munich underlined their dominance with a 12th successive league victory against Freiburg.

Hans-Dieter Flick’s squad have already sealed their eighth consecutive title in the German top flight, but showed no signs of easing the pace as they claimed another decisive victory after an early opener from Joshua Kimmich and a double from Lewandowski – the latter bringing his league goal tally to 33 this season.

Second-placed Borussia Dortmund may not be able to overtake their Bavarian rivals, but still produced a dominant performance to triumph 2-0 over third-placed Leipzig and therefore secure both the runner-up spot and Champions League qualification.

Promising young striker Erling Haland was responsible for both of Dortmund’s goals, netting first after 30 minutes and claiming a second in stoppage time.

Already-relegated Paderborn’s misery was compounded when they failed to secure three points for a 14th successive fixture when defeated 3-1 by Borussia Monchengladbach.

Gladbach, who are pursuing a top four finish, took an early lead in the fourth minute after a Patrick Herrmann effort, with a Lards Stindl double then cancelling out an equaliser from Uwe Hunemeier.

Werder Bremen’s fate is all but sealed after a 3-1 loss to Mainz left them last-but-one in the table, with a Yuya Osako strike overthrown by goals from Mainz’ Robin Quaison, Jean-Paul Boetius and Edimilson Fernandes.

Hoffenheim dominated throughout as they overwhelmed Union Berlin to cruise to an eventual 4-0 victory.

Ihlas Bebou, Andrej Kramaric and Moanes Dabour all scored before the half-time whistle, with Christoph Baumgartner sealing the victory in the 68th minute.

Leverkusen’s quest for Champions League access took a blow as they were defeated 2-0 by tenth-placed Hertha Berlin.

Hertha’s Matheus Cunha and Dodi Lukebakio both found the net to triumph over Peter Bosz’ squad, who drop to fifth as a result of the loss.

Dusseldorf’s Rouwen Hennings appeared to have given his side the lead in the opening minutes of the game, only for the effort to be ruled out by VAR – after which Florian Niederlechner responded with a goal for Augsburg.

Hennings did eventually secure a 25th minute equaliser to restore the equilibrium and leave each side with a point apiece.

Schalke’s winless streak extended to 15 games after they suffered a heavy 4-1 loss to Wolfsburg, who remain sixth after the performance.

Welsh forward Rabbi Matondo did provide Schalke with a goal, but Wolfsburg’s Wout Weghorst led the routing with a double, with Kevin Mbabu and Joao Victor both netting too.

Elsewhere in the Bundesliga, Florian Kainz converted a penalty to hand Cologne a first-half lead over Eintracht Frankfurt, but Bas Dost’s equaliser for the latter left the scoreline 1-1 at full time.

In the Spanish La Liga, Atletico Madrid overtook Sevilla to rise to third after a 1-0 defeat of Valladolid.

In a game that remained goalless until the 81st minute, it was eventually the impact of 73rd-minute substitute Vitolo that secured Atletico the triumph to boost their Champions League qualification campaign.

Espanyol remain at the foot of the table after suffering a 3-1 defeat at the hands of Levante, as Adria Pedrosa’s own goal supplemented strikes from Levante’s Borja Mayoral and Enis Bardhi.

Eibar’s winless run reached five consecutive games as they drew 1-1 with Getafe, with Oghenekaro Etebo and Charles producing a goal for each side respectively.

In the Italian Serie A Parma dropped a place to eighth after they failed to take three points from their clash with 15th-placed Torino, with the latter side’s Nicolas Nkoulou finding his 15th-minute effort cancelled out by Parma’s Juraj Kucka.

Samuel Di Carmine scored twice to seal a 2-1 victory for Verona as they faced a Cagliari squad that have not enjoyed a success in 12 league fixtures.

Cagliari’s Giovanni Simeone did net to halve the deficit, but an equaliser was not forthcoming after both teams were reduced to ten men with the dismissals of Fabio Borini and Luca Cigarini.