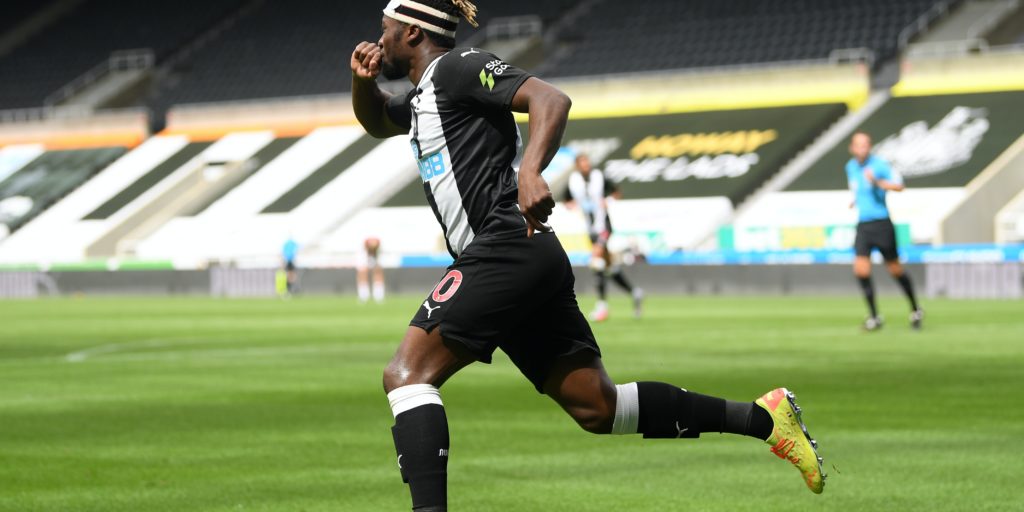 Magpies fans are also hoping that a takeover is close.

Allan Saint-Maximin has challenged Newcastle to ease themselves across the Premier League finishing line when Aston Villa head for Tyneside on Wednesday evening.

Magpies fans were left with cause for optimism on and off the field on Sunday when Steve Bruce’s men cruised to a 3-0 win over Sheffield United on their return to action as those close to the Amanda Staveley-led takeover bid hinted a breakthrough may be just around the corner.

Those suggestions came amid claims by the Saudi Authority for intellectual Property – Staveley’s consortium is heavily backed by Saudi Arabia’s Public Investment Fund – that it has blocked 231 websites allegedly offering illegal streams of Premier League games in a bid to address one of the issues being considered by the governing body as it conducts its assessment of the bid.

Newcastle fans hope a successful completion would see the purse strings loosened a St James’ Park after an era of relative austerity under Mike Ashley, but in the short term, ensuring the club is in the top flight next season is the only focus for head coach Steve Bruce and his players.

Saint-Maximin told nufc TV: “It’s really important to keep going because we know if we win a lot of games we can maybe look forwards. That’s what we are doing.

“Now we have 38 points and we play the next game against Aston Villa and we know if we do everything and we win this game, it could be 41 points and that would be great for everyone.”

Ashley may have entered the final throes of his controversial 13-year tenure, but it was two of the signings he funded last summer who caught the eye as the Blades were cut down to size.

Record GBP 40million buy Joelinton has endured a desperately difficult first year in England, but it was his running battle with central defender John Egan which resulted in the two bookings which cost the Republic of Ireland international his involvement in the game with Saint-Maximin opening the scoring minutes after Egan’s departure.

Matt Ritchie eased the Magpies further ahead with a 70th-minute piledriver before Joelinton, who had earlier squandered a one-on-one opportunity, confidently turned Miguel Almiron’s cross past keeper Dean Henderson.

Saint-Maximin said: “Joelinton works really hard. I can see him, everybody sees him work hard in training, but sometimes when you are a striker, you have a difficult time.

“That’s football, but you have to keep going, to keep working and that’s what Joelinton does every day. I think you saw everybody was really happy for Joelinton and I hope he scores again against Aston Villa.”

The win left the Magpies 11 points clear of the bottom three and just two shy of 10th-placed Arsenal with eight games to play.