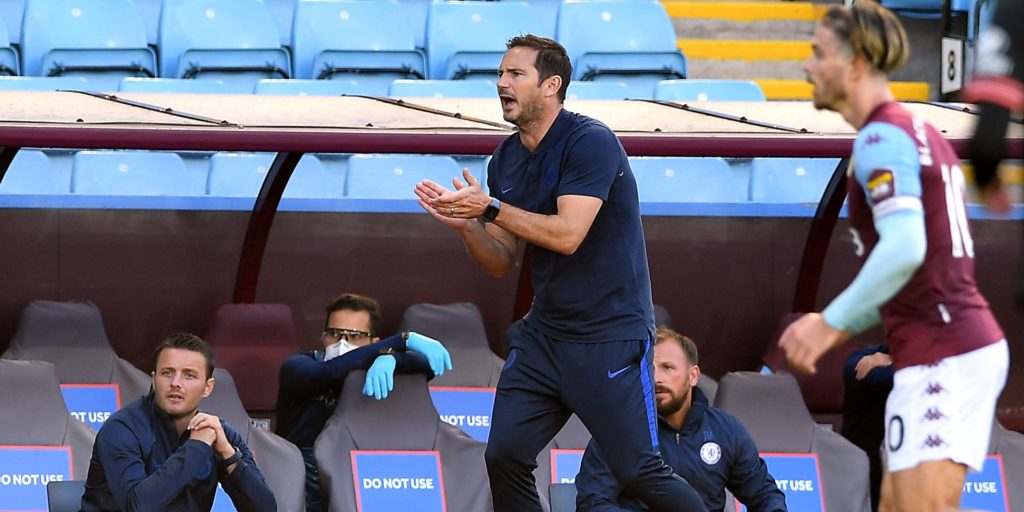 Chelsea are five points clear of Manchester United and Wolves in the Premier League.

Frank Lampard has demanded his Chelsea side improve for the final sprint for the top four.

Christian Pulisic and Olivier Giroud scored two quickfire second-half goals as the Blues hit back at Aston Villa to clinch a crucial 2-1 win on Sunday.

Third-placed Leicester and Manchester United dropped points at Watford and Tottenham respectively with Chelsea now five points ahead of United in fifth and Wolves in sixth.

Victory at Villa, after they fell behind to Kortney Hause’s opener, tightened Chelsea’s grip on fourth but Lampard wants more.

“We didn’t know exactly what we were coming in to and now we have three points when some teams have lost points around us,” he said.

“It’s important we don’t lose sight of some of the errors in the game, we conceded a poor goal.

“We played well in patches but when they put us under pressure slightly, I thought we gave it away too easily – things we will definitely have to clean up on in the future games coming up.

“I want to hang on the positive note but it’s my job also to look at things we can improve on. It’s a good feeling for us but we’ll get straight back to work tomorrow because we know the games are coming quick.

“It’s important for the group because we’ve all seen that the games are looking slightly different.”

Ruben Loftus-Cheek also made his first Premier League appearance for 13 months after recovering from a ruptured Achilles.

He played 55 minutes before being replaced by game-changer Pulisic and came close to opening the scoring when he just failed to connect with Willian’s first-half cross.

Lampard said: “I’m delighted for Ruben to be back. He’s got in the team on his own merit in the way that he’s worked for a long time but in the last three, four weeks he’s been back training, he’s looked good.

“We have to give him a little bit of time to adapt but I felt it was a good game to bring his physicality and something different and the flip of having Christian to bring on was great for me.

“He’s going to get much better. It’s a long time since he played but he has so much to give us as a team and as a squad.”