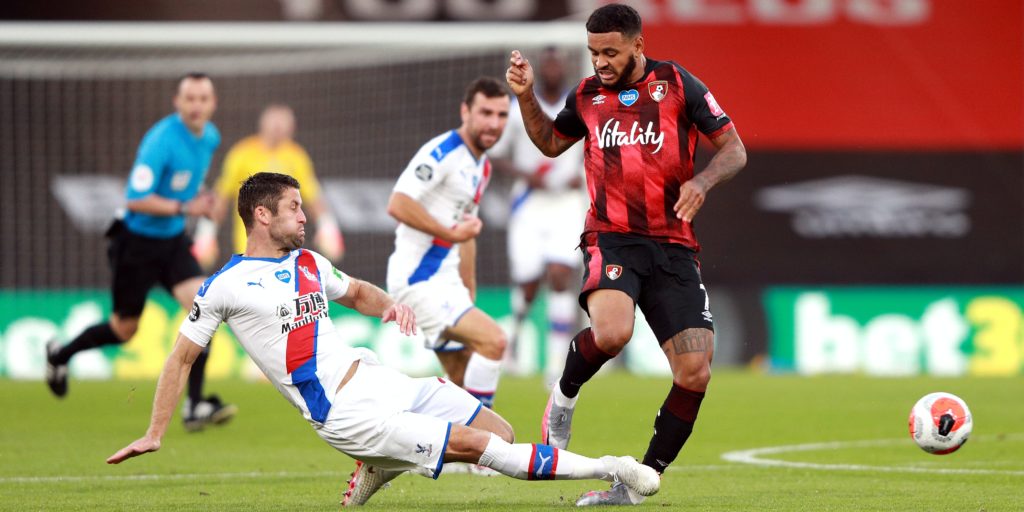 Bournemouth striker Joshua King has escaped serious injury following Gary Cahill’s crunching challenge on him and could even be fit to face Wolves on Wednesday night.

King limped off during Saturday’s 2-0 defeat by Crystal Palace after being caught full on the ankle by Cahill’s studs.

There were concerns that he could be ruled out for the rest of the season, but a scan has shown the injury is nowhere near as bad as first feared.

“We’ll wait and see,” said Cherries manager Eddie Howe. “We feared, when he went down with the ankle, that potentially his season could be over, because he signalled straight away that he’d have to come off.

“Then with the replays, it looked a like nasty injury. But the scan showed it was a very minor sprain to one of his ligaments so we’ll make a late call on Josh to see whether he’s available for the match.”

Cahill escaped a red card for the tackle after replays showed he had got the ball first.

“To be honest as a former defender I thought, ‘he’s got the ball first’. I wouldn’t be wanting a red card if that was one of my players,” added Howe.

“Unfortunately he caught Josh and we missed him for the rest of the game. But I didn’t see too much wrong with it.”

But Howe leapt to the defence of his players and warned they have not raised the white flag in the relegation battle just yet.

“Work rate is an easy thing to label at players after a defeat, but historically over the season we have been one of the hardest-working teams, our fitness stats are up there again,” he said.

“I don’t think that’s an issue. I think pressure can possibly have a detrimental effect on performance, and not dealing with the first goal. I would put it more along those lines.

“Sometimes it can look like something that it’s not. My players knew the importance of the game, they are good professionals who wanted to win. It just didn’t quite show in the way it needed to.

“We have to look at the longer-term picture. We are in a very difficult position, we are fighting to stay in the league but one win changes everything, it changes perceptions, our position, it changes the whole outlook with everyone connected to this football club.”