Home News Southampton looking up not down, says Ralph Hasenhuttl

Southampton looking up not down, says Ralph Hasenhuttl 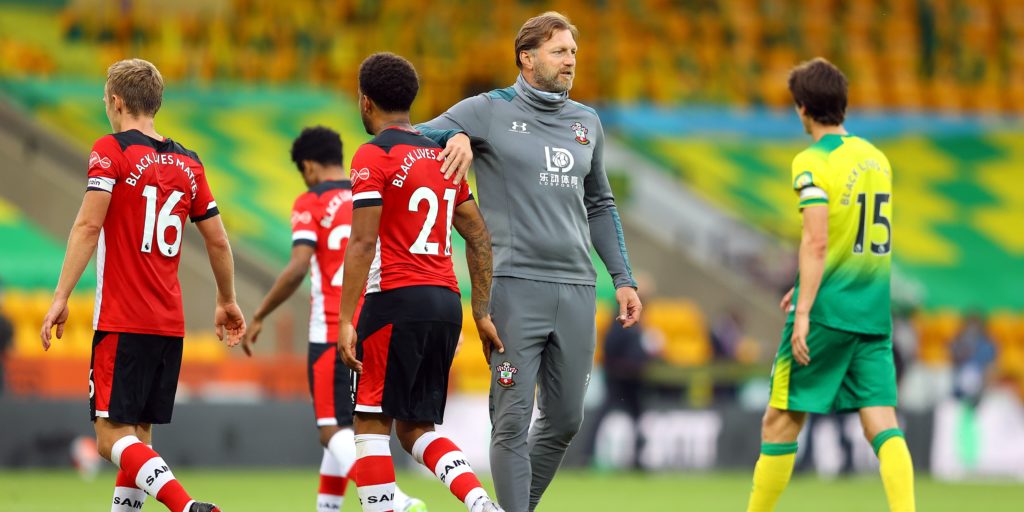 The Saints are closer to the European spots than the relegation zone.

Ralph Hasenhuttl’s attention is on moving up the table rather than merely reaching the 40-point mark when Southampton look to compound Arsenal’s woes.

Saints returned from the coronavirus suspension with a bang at Carrow Road last Friday, when Danny Ings, Stuart Armstrong and Nathan Redmond scored in a deserved 3-0 win against Norwich.

Hasenhuttl’s men are now preparing to step out at St Mary’s for the first time since March, with Arsenal arriving on the back of a heavy 3-0 loss at Manchester City and galling 2-1 defeat at the hands of Brighton.

Victory on Thursday would take Southampton level with Mikel Arteta’s Gunners on 40 points – a remarkable feat for a side humbled 9-0 at home by Leicester in October – but safety is not enough for their Austrian head coach.

“We want to take as much points as possible in the last eight games,” Hasenhuttl said.

“The more wins we take the higher we climb in the table so we know that for relegation I think we are in a very good position now. It’s quite unlikely that we get relegated, I think.

“One more win and we have 40 points and with 40 points we are almost sure we are safe – but there’s more to get for us and when we show the behaviours we showed in the last game and during the whole pre-season. I was quite happy with the way the team worked on the pitch.

“They had a difficult start against Man City and three away games in a row is never easy.

“A few problems with injuries too – a bad one with Bernd Leno this week and I wish him all the best that he gets fit soon.

“We knew it would be difficult in the beginning with a lot of games in a short time so everyone must try to have the squad in the best physical shape as possible so we showed last week that we’re in good shape.

“But Arsenal, especially in front, they have so much quality, especially with the ball – it’s a fantastic team so we must be very organised and concentrated and then we have a chance.”

Saints were agonisingly close to winning the reverse fixture against Unai Emery’s side in November, only for a last-gasp Alexandre Lacazette effort to seal the hosts a fortuitous 2-2 draw.

But Hasenhuttl believes that match was a turning point for his side, who had shown spirit and skill in that game despite a run of four successive defeats that included the horror loss to Leicester.

“It was an important game,” Hasenhuttl said. “I remember this.

“We went to a back four for the first time and had a very good game against an opponent who only equalised in overtime so we took just one point.

“But I think it was one of our best games this season until that moment and absolutely something of a turnaround for us.”

Shane Long will be available for a Southampton side who will continue to be without Moussa Djenepo following his red card against Newcastle before the Covid-19 suspension.

Kevin Danso and Kyle Walker-Peters will be available for the run-in after their loans were extended.