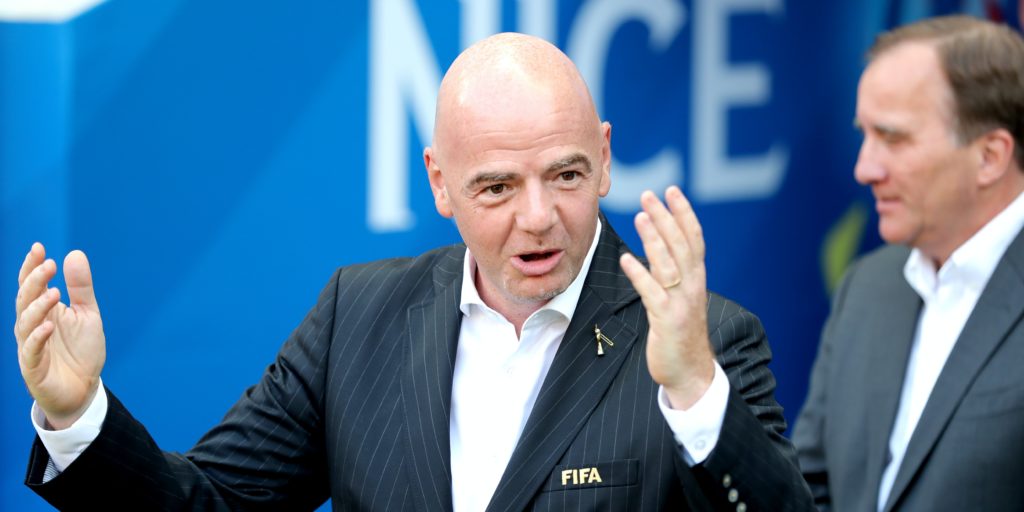 The competition had been due to take place in China in the summer of 2021.

FIFA outlined its sporting and economic path out of the Covid-19 crisis on Thursday, although no date has yet been fixed for its expanded Club World Cup.

The competition was due to take place next summer in China but FIFA agreed to delay it when Euro 2020 and this summer’s Copa America were forced back to 2021 by the coronavirus pandemic.

A raft of decisions on the men’s international match calendar were taken by FIFA Council on Thursday along with confirmation of a 1.5 billion US dollar pandemic relief fund, but the precise date for the Club World Cup remains up in the air.

“The latest on the Club World Cup is that it will be the most fantastic competition ever to be organised, but we don’t know yet when,” FIFA president Gianni Infantino said.

He said the competition would be “viable” and that initial commercial discussions on sponsorships pre-pandemic had been encouraging.

“It’s obvious it’s very big – just imagine the biggest clubs in the world playing in one place to crown the world champion, I think this is a very, very appealing event and I’m sure it will be very successful,” he added.

The decisions taken on Thursday included the extension of the international window in Europe by a day in October and November to allow for each country to play a ‘triple header’ of fixtures instead of the usual two.

The extension will enable the Euro 2020 play-offs – originally due to have been played in March – to be played in those windows, while also accommodating the 2020-21 Nations League.

The September international window will go ahead in Europe and South America as planned but has been postponed in Asia, Africa, Oceania and the CONCACAF zone, which covers North and Central America and the Caribbean countries.

The June 2021 window will be extended by seven days in those regions to make up for the September 2020 postponement.

The intercontinental play-offs for the 2022 World Cups will now be played in June 2022 instead of March of that year, with the finals in Qatar being played in November and December.

Top players face an incredibly busy schedule ahead, with world players’ union FIFPRO having already warned players must be given at least a three-week break between the end of the delayed 2019-20 season and the start of the 2020-21 season.

Infantino said players’ well-being was a priority for FIFA.

“Health is important, and when we come to football the health of the players is important so we need to analyse this,” Infantino said.

“We need to think, and I said this publicly as well, is there a maximum number of games that can be played, if you play one minute or 90 minutes it’s also a difference.”

FIFA’s Covid-19 relief fund is made up of three stages. The first two stages relate to development grants under FIFA’s Forward 2.0 scheme, but as part of stage three each of the 211 national associations will receive one million US dollars as a Covid relief grant, split into two equal payments to be made in July of this year and January next year.

They will also receive a further 500,000 US dollars in July specifically to support girl’s and women’s football in that country.

Associations can then apply for interest-free loans of up to 35 per cent of the revenue declared in their most recent financial statements, with 500,000 US dollars the minimum loan size and 5m US dollars set as the maximum.