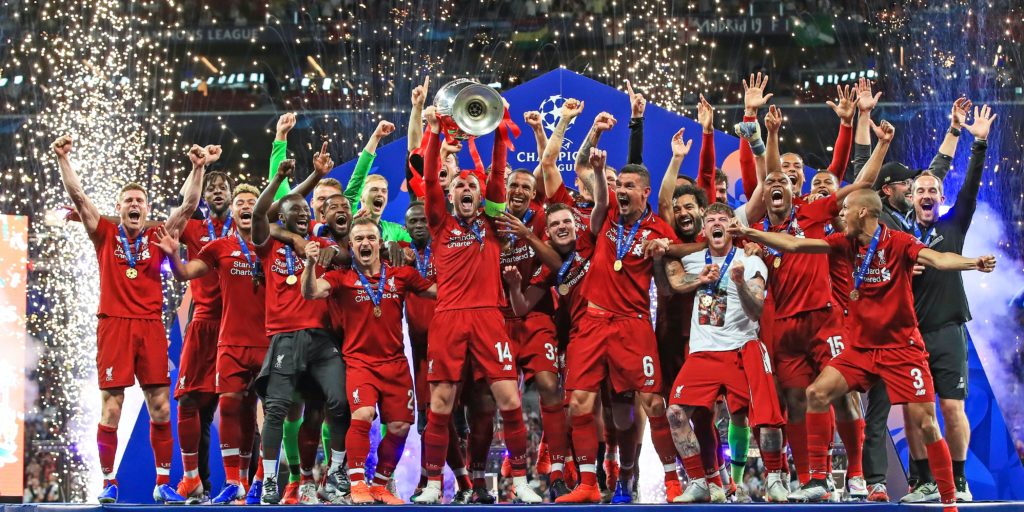 Liverpool added the Premier League title to the Champions League and Club World Cup in the last 12 months.

Liverpool manager Jurgen Klopp sounded an ominous warning to their rivals that his newly-crowned, runaway Premier League champions “will not stop” in their quest for more trophies.

The German has ended a 30-year wait for a top-flight title, adding it to the Champions League and Club World Cup in the last 12 months, but he does not believe it will finish there.

And the Reds boss said everyone at the club still had “big dreams” to fulfil after wrapping up the title with seven matches remaining, the quickest it has been achieved.

Asked what is next Klopp, whose side finished second to Manchester City with a record 97-point tally last season, emulated the ‘Never Gonna Stop’ chant adopted by fans on their way to last summer’s Champions League triumph.

“I don’t know, what is next? The last 13 months were pretty special for us, that’s absolutely true,” he said.

“I’d like to involve the year before that because it was an incredible football time in my life, winning so many points was absolutely exceptional and I didn’t experience it before – good parts in my career but not that good.

“The consistency the boys have shown is so exceptional I can’t describe. I – and we – will not stop, that’s it. We will not stop, we will stay focused and we see the opportunity.

“But ‘Will not stop’ does not mean we will win everything. I can’t promise we will win something but we will try everything to improve.

“We have a common idea and common dream. We have big dreams and we’ve always had them – that doesn’t mean we can fulfil them but we have to give them a proper try and that is what we have done since we have been here.

“Not more, and it will never be less, and the more people dream the more important and stronger it gets.

“Of course without the players buying into this philosophy I have no chance but we will not stop.”

After 30 years of waiting Liverpool will have to be a little more patient as captain Jordan Henderson will not, PA understands, get his hands on the actual trophy until the club’s final home match against Chelsea on July 18.

The Premier League are still working out appropriate plans to crown them champions while still adhering to the relevant health and safety perimeters currently in place.

Liverpool City Council are also looking into the prospect of staging a parade to mark the achievement, although that is likely to be dependent on the relaxing of coronavirus restrictions.

By bringing a 19th league title back to Anfield Klopp has, in the eyes of the majority of fans and many pundits and former players, elevated himself to a status reserved only for Bill Shankly, Bob Paisley and Kenny Dalglish.

Steven Gerrard, who vies with Dalglish for the honour of the club’s greatest player, called for Klopp to have a statue at the ground in his honour like Shankly and Paisley.

However, the German dismissed that prospect.

“They all got that when, I think, they were not here any more. I want to live for 30 or 40 years so I am not interested in statues, for sure not in my lifetime – I don’t want to pass anything like that,” he added.

“I am the manager of this team and we won the league so people see this as positive I can imagine but you don’t have to compare me with these iconic figures.

“I’ve been here for four and a half years, I came from Germany and tried to do my job, loved the city, loved my job but there is no comparison possible or needed.”

Klopp admitted he began to finally believe the title was theirs in mid-March, just before the season was suspended.

“I think I had a little idea of it the last weekend before the lockdown, we won against Bournemouth and and City lost the next day and it (the gap) was 25 points with City having a game in hand,” he said.

“There was a moment when I thought it looked pretty good. Then the world changed and we had three and a half months in a lockdown and that was obviously very difficult and I didn’t think too much about it.

“When City were playing like the stars from the sky, and we played against Everton and you thought ‘Hmmm, there’s still a chance’ – and there was a chance (they might be caught).

“As long as it is not decided you cannot celebrate and we didn’t but played the Palace game (a 4-0 victory on Wednesday) and made it clear we are still here as well and the rest is already history.”