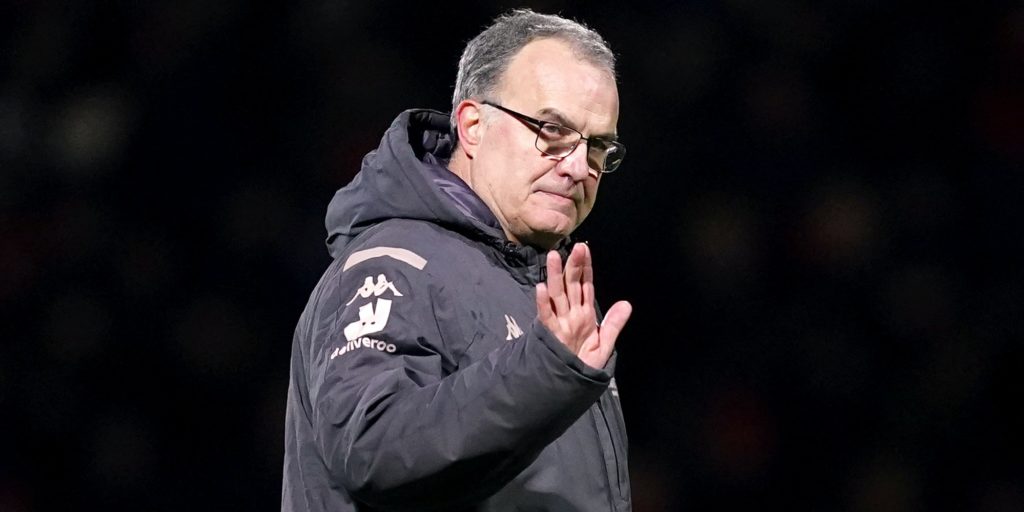 Leeds aim to bounce back from last week’s defeat at Cardiff against promotion rivals Fulham.

Marcelo Bielsa is convinced his players will cope with the growing sense of expectation at Elland Road.

Leeds aim to bounce back from last week’s defeat at Cardiff against promotion rivals Fulham behind closed doors on Saturday.

Around 15,000 cardboard cut-out ‘crowdies’ will be placed in the stands for Leeds’ first game at Elland Road since the season resumed.

Bielsa’s side, whose promotion bid ended in the play-off semi-finals last season, are second in the table behind leaders West Brom and will open up a 10-point gap between themselves and third-placed Fulham with victory.

“We cannot link this match with the disappointment of last season,” Bielsa said.

“I don’t think that last season the team couldn’t cope with the situation. If there is something this team has shown every time they play, it is character.

“The eight matches that are left are going to generate the same expectation until the situation is defined.

“Every match is important. This has a more valuable meaning because we play with the direct and closest team to us in the fight for promotion.”

Bielsa will on Friday assess the fitness of Pablo Hernandez, who is hoping to return after missing out at Cardiff due to a muscular problem.

Apart from long-term absentee Adam Forshaw Leeds will have a fully-fit squad to choose from.

The Argentinian said the usual Elland Road atmosphere generated by Leeds fans would be missed, but expects both sides to chase a significant win.

“Of course playing without spectators is not the same as when you play with fans, to play at home or away without fans also, there is a difference there,” Bielsa said.

“It would be unfair to underestimate what the fans mean for everything, even more for a team such as Leeds, that has fans who everybody knows the characteristics.

“Our supporters have a big impact, but after saying that we have no excuse to say we performed badly because the fans are not in the stadium. The wish to win is the same.”

Bielsa said he was wary of the new rule allowing up to five substitutions in matches, introduced until the end of the season in a bid to help players with their fitness following recent inactivity due to the coronavirus pandemic.

“Clearly what affects the play are the interruptions in each half for the five substitutions,” he added.

“Because how the teams are managing substitutions goes in the opposite way of the intention of the rule.

“The intention was to bring freshness to the teams, but now the teams are using the substitutions for tactical reasons.”