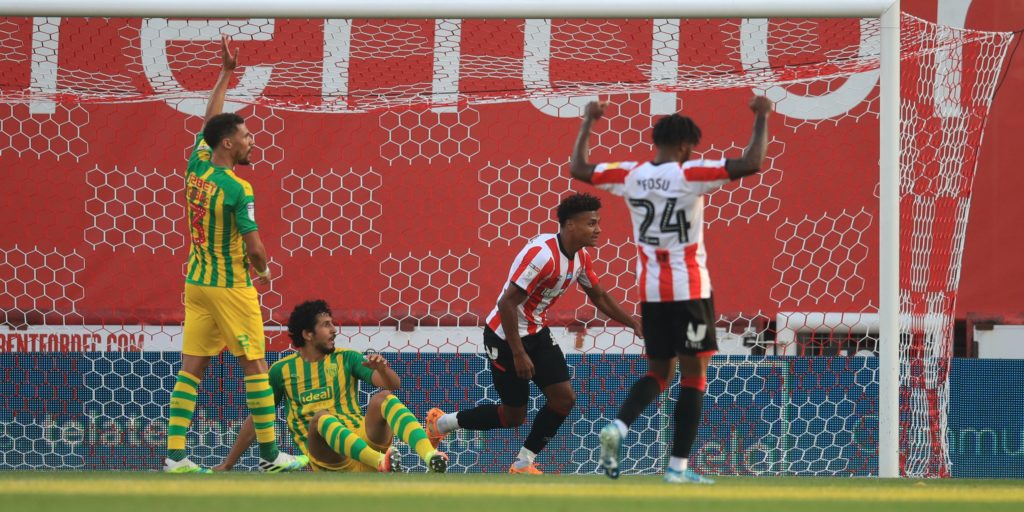 The Baggies remain top but the Bees are now just five points behind them and Leeds.

Watkins was the difference between two teams in an intriguing contest that ebbed and flowed in spells either side of the break.

The Bees took the lead in the 16th minute when Watkins got on the end of a sweeping move to bundle the ball into the roof of the net for his 23rd of the season.

Josh Dasilva picked the ball up on the centre circle and played a slick one-two with Said Benrahma wide on the left before crossing low for Watkins to fire home.

The hosts’ early breakthrough changed the complexion of the game, with Thomas Frank’s side happy to win the duels in the middle of the park, defend calmly and hit the Baggies on the break.

And with Albion failing to create any clear-cut chances in the first 45, the Bees were good value for the half-time lead and always looked the more likely to stretch their lead.

Algerian winger Benrahma pounced on a low Tariq Fosu-Henry cross from the right in the box, but his first touch let him down at the crucial moment.

Albion’s first worthwhile effort on goal was a long-range free-kick from Grady Diangana on the half hour, but home keeper David Raya dealt with it comfortably beneath his bar.

The Baggies’ engine room of Jake Livermore and former Brentford playmaker Romaine Sawyers struggled to impose themselves on the game and were forced deeper and deeper as the half wore on.

But the introduction of Kenneth Zohore at the break breathed fresh life into West Brom, and within minutes Matheus Pereira found space on the left to test Raya with a dipping drive.

At the other end, Watkins was inches away from making it two as he tried to latch on to Fosu-Henry’s cross but saw his close range volley blocked.

West Brom thought they had levelled in the 53rd minute, Zohore turning onto Pereira’s zipped pass to smash a volley against the bar from the edge of the box as his side continued to find pockets of space they failed to before the break.

Pereira was playing an increasingly important role bursting forward into the holes and tested Raya with a low 25-yard drive in the 67th minute.

The game opened up in the last 20 minutes and Ethan Pinnock had to put his body on the line to block Diangana’s goal-bound drive.

Substitute Bryan Mbeumo forced a smart save low down from Sam Johnstone as Brentford looked to hit their increasingly anxious visitors on the break.

They nearly did not have to when Johnstone slipped as he went to collect Semi Ajayi’s back pass in what would have been a bizarre end to a high-quality game played in surreal conditions.

West Brom ran out of invention as the game drew to a close and Pereira was subbed, leaving them still searching for their first goal in three games.