Home News On This Day in 2010: Frank Lampard’s ‘goal’ that changed everything

On This Day in 2010: Frank Lampard’s ‘goal’ that changed everything 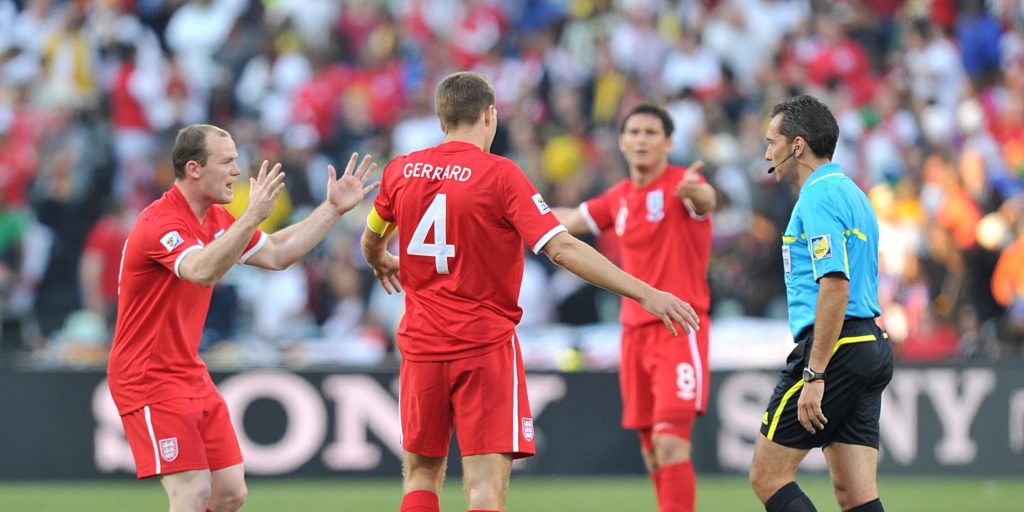 Uruguayan referee Jorge Larrionda failed to spot that the ball was well over the line when England trailed Germany 2-1 on June 27, 2010.

It was the ‘goal’ that changed everything.

England trailed Germany 2-1 in the 38th minute of their last-16 World Cup match in Bloemfontein on June 27, 2010 when the ball broke to Frank Lampard on the edge of the box.

With the ball in the air, he managed to loft it over Germany goalkeeper Manuel Neuer who was well off his line. The ball struck the crossbar and deflected downwards but was clearly still on a goalward trajectory.

It landed around a foot over the line, and even watched in real time it was clearly in, to such an extent that though the ball spun back, it still hit the underside of the bar for a second time before Neuer smothered it on the line.

Only when the first replay came up was it obvious to all what had happened, and clear that this would be more consequential than either Geoff Hurst’s second goal in the 1966 World Cup final or Diego Maradona’s ‘Hand of God’ goal 20 years after that.

One of the only people in the world not in the know by this point, crucially, was Uruguayan referee Jorge Larrionda.

“I was sitting in the stadium, and a few seconds (after the incident) I received a text message from a family member saying that it was a clear goal,” Lukas Brud, the current secretary of the game’s law-making body the International Football Association Board (IFAB), recalled in an interview with the PA news agency.

“That incident was the main driver for change. In a World Cup match, England v Germany, high-profile, a clearly scored goal was not given. It wasn’t even pressure after the World Cup – it was ‘everyone else knows what happened, the only person who doesn’t is the referee’. A goal is the most important moment in a game, and the human eye cannot always give the right answer.

“Eventually we would have come to (goal line technology) without that moment, but when would that have been? That’s a good question.”

Brud became heavily involved in the professional process FIFA set up which followed, to first outline bench-marking criteria and then invite companies to put their systems up for rigorous testing.

Goal-line technology (GLT) came up in the minutes of an IFAB annual general meeting as early as 1999, as part of a proposal from the Football Association.

By 2007, the Premier League had already set out what it saw as the minimum principles for a workable system, principles which still seem relevant 13 years on – decisions must be immediate, they must be accurate and crucially they must be communicated to the referee in real time.

At an IFAB meeting in March 2010 – just over three months before the 2010 World Cup began – trials of two systems were ruled out. There were two reasons why GLT appeared dead in the water at that point – the results of testing were inconclusive, and there remained concerns among two of the most powerful individuals in world football at that time – FIFA president Sepp Blatter and his UEFA counterpart Michel Platini – that the elite game would move too far away from grassroots football.

But the Lampard incident meant it became a question of when, not if, the technology would be introduced.

“I think it is time to bring in goal-line technology,” Lampard said on the day of the game.

“We had a meeting before the World Cup when we were told about a million different rule changes that hardly affect the game.

“The big one, the one that affects the game today, hasn’t been brought in so it is a no-brainer.”

Introducing it may have been a no-brainer, but that did not mean that a great deal of thought was not required to get to that point.

Thirteen companies, including some whose technology was based on principles developed in the car manufacturing sector, each took part in presentations to FIFA in October 2010 lasting half a day.

Nine companies were invited forward to the first phase of independent testing in November and December 2011, with eight ultimately taking part.

Brud said the systems were exposed to the “natural circumstances” of a football match – sub-zero temperatures, extreme heat, the movement of cameras and other equipment caused by spectators in a stadium, and many, many more scenarios.

By July 5, 2012, a specially-convened meeting of IFAB enshrined the benchmark criteria for the technology, and at the end of the year two systems – Hawk-Eye and GoalRef – were tested at FIFA’s Club World Cup in Japan.

Brud recalls that, to win the hearts and minds of the referees, a group of elite officials attending that tournament were given a demonstration of how difficult it is to tell whether a ball is over the line or not, even from four or five feet away. They were asked to judge whether a ball suspended in the air was over the line from such a distance, and unanimously thought it was. When they walked forward, they could see that the ball was actually covering the line – not even close to being a goal when the whole of the ball must cross.

In August 2013 the technology was introduced to the Premier League, with Edin Dzeko’s goal the following January the first to be awarded by the technology.

It was used for the 2014 World Cup, and got its first outing to award a goal to France in their group-stage victory over Honduras.

UEFA seemed satisfied to use additional assistant referees (AARs) to make goal-line calls – they were approved at the same July 2012 IFAB meeting as GLT. A change in leadership at UEFA led to goal-line technology being used in the 2016 Champions League and Europa League finals, and that summer’s European Championship in Poland and Ukraine.

GLT has enjoyed fairly smooth sailing since, to such an extent that when the technology failed earlier this month during the Aston Villa v Sheffield United match, the referee Michael Oliver and the VAR did not take another look because the system had been so effective and they did not think to question it.

Hawk-Eye, in apologising for the glitch, pointed out that its cameras had not been impaired in such a way in over 9,000 previous matches.

Asked about that incident last week, Lampard – now the manager of Chelsea – said: “We all pretty much take for granted that it works.”

That underlines just how far the sport has come in the last decade.