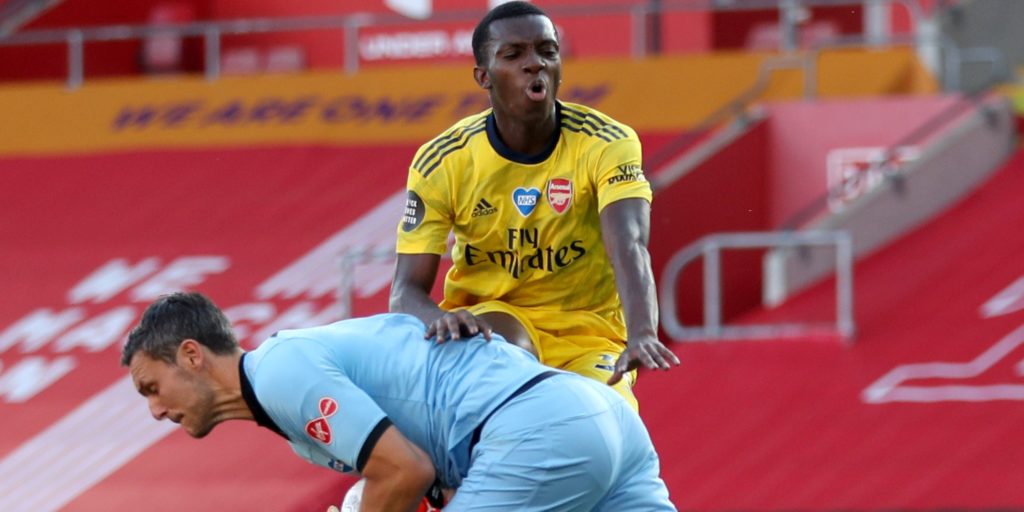 Hasenhuttl’s frustration at the error remained palpable the following day.

Ralph Hasenhuttl will give Alex McCarthy time to redeem himself rather than “kill” the Southampton goalkeeper following an error as inexplicable as it was awful against Arsenal.

Having returned from the coronavirus suspension with a bang at Norwich, that 3-0 away win was followed by an all too familiar failing at St Mary’s on Thursday evening.

The Premier League’s worst performing home side fell to a 2-0 loss to the out-of-sorts Gunners, with McCarthy’s atrocious pass into the path of Eddie Nketiah putting Mikel Arteta’s side on course for victory.

Hasenhuttl’s frustration at the error remained palpable the following day, but the Saints boss vowed to give McCarthy another chance with Angus Gunn waiting in the wings ahead of Sunday’s trip to Watford.

“Let’s have a look (how it goes),” the Austrian said when asked if Gunn could get a chance between the sticks before the season is out.

“I don’t want to kill one goalkeeper because he makes a mistake when we want to play out a little bit more.

“Although this mistake yesterday was an awful one because it was not really pressure then at that moment, so it was too easy how he gave it away. So easy, can’t do it.

“There were a few other moments where he can have a better positioning in the pitch, but I see now also a progress in his game so let’s give him time and we will do this.”

As well as that howler, McCarthy could not get hold of a second-half Alexandre Lacazette attempt as Joe Willock rounded things off for Arsenal.

That strike came from the free-kick that followed Jack Stephens’ sending off for taking down Pierre-Emerick Aubameyang, with the Saints defender played into trouble by Pierre-Emile Hojbjerg’s terrible pass.

Such errors have punctuated Saints’ season and seen them regularly take a step back when things had been looking up.

“If you listen yesterday evening to Jurgen Klopp, what is the big change they made in the last years it was exactly this part of consistency,” Hasenhuttl said.

“In the first two, three years when he was there, they had always terms where they were not hungry anymore.

“I think it’s the type of character you must implement in a team and it’s sometimes only possible if you change a few guys in the future and then create a new spirit, a new character in the team.

“It’s definitely that every time we want to make the next step to come maybe in the top 10, we are failing.

“This is definitely something we will have an eye on in the summer.”

Stephens will miss the trip to Vicarage Road following his sending off against Arsenal – a match Sofiane Boufal missed with a thigh complaint.

Moussa Djenepo this weekend serves the final match of a three-game ban for his March red card against Newcastle.