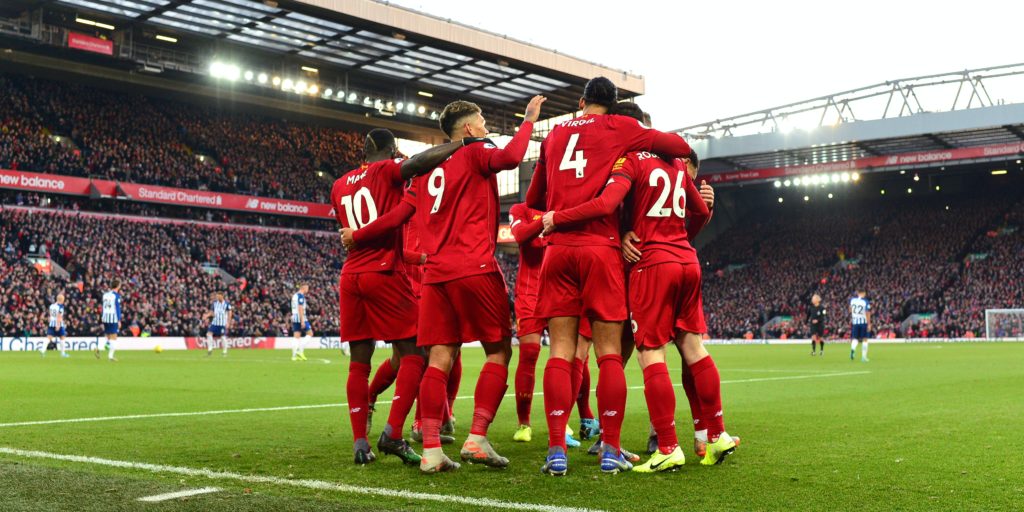 The Reds have won the Premier League for the first time.

Liverpool secured their first top-flight title since 1990 in record time with seven matches remaining, beating the previous Premier League best of five by Manchester United in 2000-01 and Manchester City in 2017-18.

Here, the PA news agency looks at some of the key moments of their remarkable season.

Liverpool, in a strangely impotent performance considering their form, were staring at a first league defeat in nine months courtesy of Marcus Rashford’s strike in the first half. However, substitute Adam Lallana’s first goal in almost two and a half years rescued their unbeaten record five minutes from time.

This match produced possibly the most significant five minutes of the whole campaign. Trailing to Trezeguet’s first-half goal, Andy Robertson popped up with a rare effort to equalise with an 87th-minute header before Sadio Mane glanced in Trent Alexander-Arnold’s corner in added time. Defeat would have reduced Liverpool’s lead to just three points with main rivals Manchester City their next opponents.

Liverpool never looked like allowing the visitors to close the gap as, despite Pep Guardiola’s side dominating the opening exchanges, City went behind to a brilliant Fabinho goal. Mohamed Salah and Mane extended the advantage, which meant Bernardo Silva’s late effort was little consolation as Klopp’s side opened up a nine-point gap to City.

Billed as a genuine test for Klopp’s side on their return from Qatar as Club World Cup champions, second-placed Leicester were blown away. Two for Roberto Firmino and one apiece for James Milner and Alexander-Arnold extended Liverpool’s lead to 13 points.

The day Liverpool fans dared to believe their long wait for a title was coming to an end. An early Virgil Van Dijk header was followed by Salah’s breakaway goal in stoppage time, but the lateness of the second strike did not do justice to the dominance they had in the game. Victory stretched the gap to City to 16 points and, for the first time in a long time, the Kop sang ‘We’re going to win the league’.