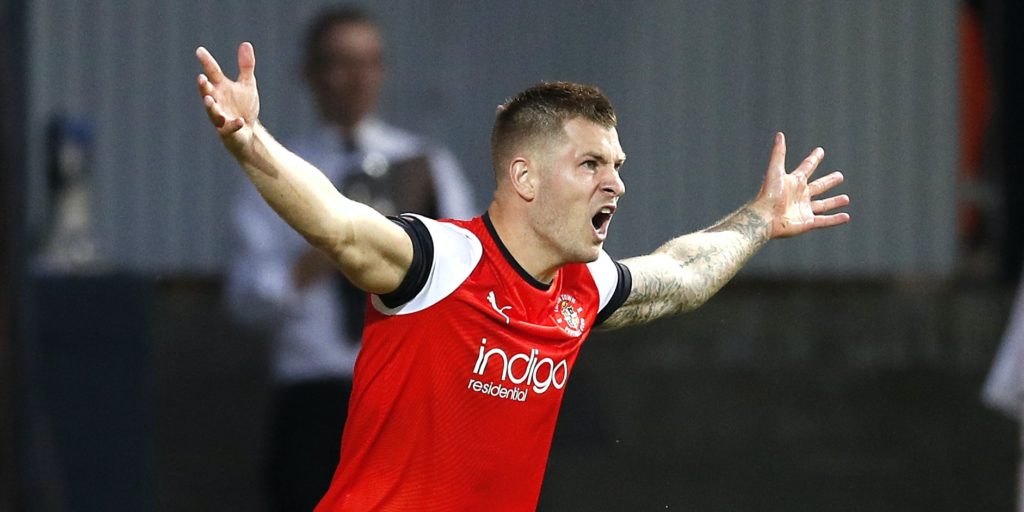 The hosts had Jordon Garrick sent off for aiming a punch at Collins late on.

Luton saw their hopes of Sky Bet Championship survival improve with a shock 1-0 victory at 10-man Swansea thanks to a second-half header from striker James Collins.

Nathan Jones’ side travelled to south Wales bottom of the table, but they did not play like relegation candidates as they had the better of a poor first half.

Swansea were far from their best and Collins made them pay in the second half as he settled what was a game of few chances.

Jordon Garrick was sent off in the 83rd minute for Swansea for a punch, capping an afternoon to forget for their head coach Steve Cooper.

Luton’s Dan Potts headed wide and home forward Andre Ayew worked Simon Sluga, but it was the visitors who had a golden chance to open the scoring.

After Aldo Kalulu gave the ball away, Harry Cornick escaped down the right and cut inside on to his left foot. With the goal gaping, he could only blaze a wild shot high and wide.

Swansea’s frustration was obvious as they struggled to make their possession count and goalkeeper Freddie Woodman had to collect a dangerous Potts cross.

It left Cooper with plenty to do as the game reached half-time scoreless.

Ayew’s shot was the only first-half effort on target and the wasteful Kalulu was withdrawn in favour of Garrick for the second period.

Swansea were immediately improved and their next change saw Jay Fulton – who had taken a nasty first-half fall – replaced by the more attacking George Byers.

At the other end, Luton finally worked Woodman as Pelly Ruddock Mpanzu shot from distance, while Ayew headed a Matt Grimes free-kick over.

Ayew was the only home player who looked capable of breaking the deadlock as both teams lacked creativity, but Swansea had two quick chances.

Grimes’ corner was headed on goal by Ben Cabango. Sluga produced a smart save but the quiet Rhian Brewster could not put the rebound on target.

Swansea paid the price in the 72nd minute.

Hatters substitute Izzy Brown crossed from the right and Collins rose high above Cabango. His powerful header could only be palmed into his own net by Woodman.

Swansea were shocked and could not find a response. Grimes had a free-kick tipped over the bar by Sluga and their frustration boiled over when Conor Gallagher and Byers made wild challenges.

It prompted a scuffle in which Garrick swung a punch at Collins and was sent off.

His dismissal led to a bad-tempered last few minutes – not that it bothered Luton, who took home what could yet be a priceless three points after nine minutes of added time.