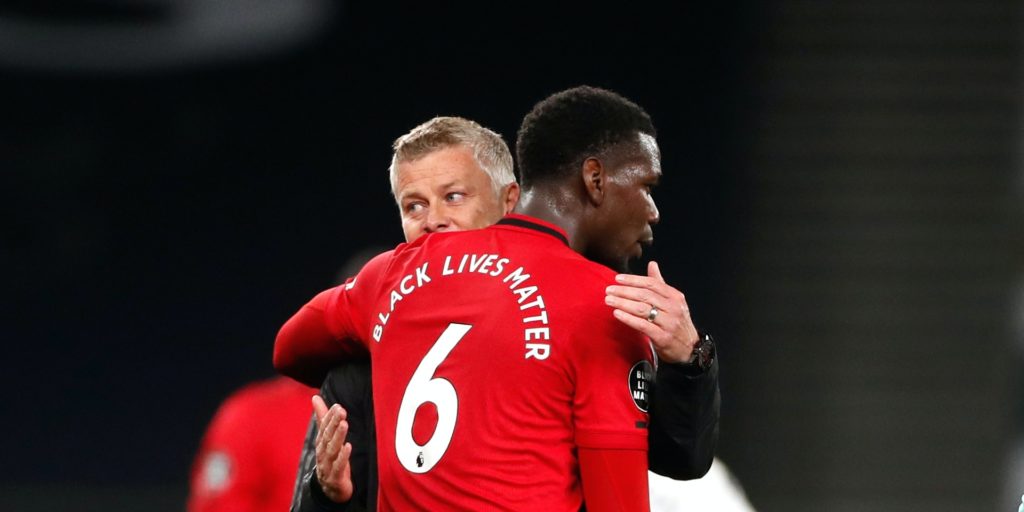 The Frenchman is forging a strong midfield relationship with recent signing Bruno Fernandes.

Ole Gunnar Solskjaer is excited to see how Paul Pogba and Bruno Fernandes develop together as the Manchester United manager once again reiterated his intention to keep the France midfielder.

United are preparing for a key FA Cup quarter-final clash at Norwich amid wild celebrations down the road at Liverpool, who on Thursday saw their 30-year wait for the league title come to an end.

Solskjaer’s fifth-placed side are an eye-watering 37 points behind the Reds and, despite being on a 13-match unbeaten run in all competitions, need to improve if they are to launch a first title challenge since Sir Alex Ferguson retired.

The January arrival of Fernandes has certainly boosted their chances, as has Pogba’s return to fitness, with the World Cup winner making his first start since September in Wednesday’s 3-0 win against Sheffield United.

“I am certain that they can play well together, yes, because they have proven both in training and in the games they’ve played together that it’s exciting,” Solskjaer said of the midfield duo.

“Of course it has been encouraging to see them together but it’s also encouraging how Nemanja (Matic), Scott (McTominay) and Fred are making it difficult for me to leave them out, which is a good position for me to be in as a coach.

“But of course you want to give Paul the chance to get 100 per cent fit and back to his best.

“He has been out for so long. I think it says everything about the quality of the boy, his performances.”

Pogba put in a promising display against the Blades and looks determined to end the season on a high, but speculation about his future is never far away.

Asked if he was confident Pogba would still be at Old Trafford next season, Solskjaer said with a laugh: “Here we go again!

“I don’t think you can ever question Paul’s professionality. He is a very, very professional boy and he lives his life the right way. He wants to be the best he can be.

“He knows he’s a special talent and he doesn’t want to in five, 10 years’ time look back and say, ‘I didn’t make the most of it’.

“Because he is already a World Cup winner, he has won things with Juventus and us, so I’m not surprised by his enthusiasm and dedication to us.

It is unclear when the transfer window will be open due to the Covid-19 pandemic but there are decisions to make about a number of players, including Chris Smalling after an impressive season on loan at Roma.

Alexis Sanchez, who has had an injury-hit spell with Inter Milan, is another but Solskjaer said such decisions will be made at the end of the season,

And even if either club wanted to strike permanent deals, it is difficult to tell who can afford what given the financial impact of the coronavirus crisis.

“I think the pandemic has hit everyone really hard,” Solskjaer said when looking at United’s transfer plans.

“I still think we need to wait and see how things are panning out to know the real effects of the pandemic, to know what kind of financial state we are in.

“You see some teams invest, some teams don’t. We’ll have to take a big look at things ourselves to see how hard we’ve been hit.

“I know the club has announced a few numbers before and of course it’s not right for me here now to say, ‘we are going to have X amount’ because I don’t really know. We don’t really know how hard we’ve been hit.

“We are financially a strong club – but we are also probably being hit more than anyone else.

“So, let’s see how quickly we can get our fans into the stadiums and of course the league position is going to be important for us this season. If we can get a trophy, the FA Cup or the Europa League.

“The Europa League will also qualify us for the Champions League, so still a lot of uncertainty and these three, four months, they’ve made every businessman in the world, every footballer in the world… I think everyone is still unsure of what the effect will be.”