Danny Ings at the double as Saints sting struggling Hornets 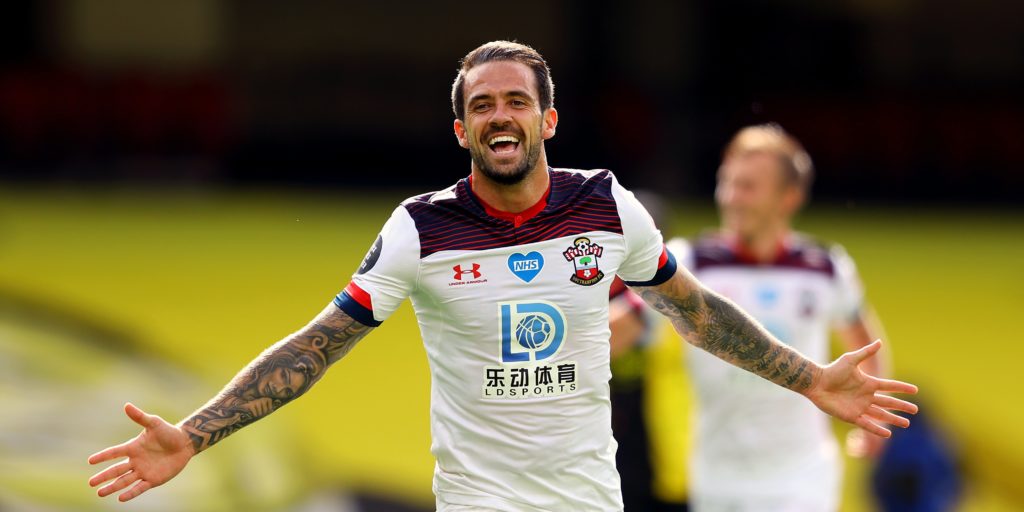 Southampton striker takes his goal tally to 21 for the season in 3-1 win at Vicarage Road.

Danny Ings struck twice as Southampton rebounded from their lacklustre performance against Arsenal with a comfortable 3-1 win at struggling Watford.

Saints had lost their last match 2-0 at home to Arsenal on Thursday, but manager Ralph Hasenhuttl said before the trip to Watford he expected a response, and his team reciprocated.

Ings got Southampton off to a dream start, firing in his 20th goal of the season in the 16th minute, before adding a second to his and Southampton’s tally just after the second-half drinks break.

The Hornets pulled one back towards the end of the match when Jan Bednarek turned a Jose Holebas cross into his own net.

However, Southampton’s two-goal lead was restored less than three minutes later when James Ward-Prowse struck his fifth goal of the season with an impressive free-kick.

Watford have struggled since the restart and have now taken just one point from their last three matches and are precariously placed with just one point separating them from the Premier League relegation zone.

Andre Gray, Nathaniel Chalobah and Domingos Quina were left out of Watford’s squad and a post on the club’s Twitter account said all three were omitted “to ensure the health and safety of all players, staff and officials at today’s game.” Reports had suggested Andre Gray hosted a party on Friday at his house for around 20 people.

The Hornets got off to a slow start, with Ben Foster’s goal coming under pressure before Southampton opened the scoring.

In-form Ings drove through the midfield before drilling the ball into the corner of the net.

The striker made the most of the space as the Watford defenders struggled to close him down to score his ninth goal on the road in his last 11 away Premier League starts.

Nathan Redmond tested Foster from a 30-yard free-kick but the goalkeeper, making his 100th consecutive Premier League start, was able to gather the ball.

Towards the end of the fist half, Ismaila Sarr thought he had a penalty claim and stopped his run in the box, but VAR did not take another look at whether his shirt was pulled.

Captain Troy Deeney sent a long-range effort far over Alex McCarthy’s goal as Watford looked to make an impact on the game at the start of the second half.

The Hornets tried to put pressure on the Southampton defence but were limited to long-range shots which were often blocked.

The second drinks break broke up the home side’s momentum, and Nigel Pearson’s side were punished further when Ings capitalised on Foster’s mistake to double his side’s lead.

The former England keeper’s clearance throw landed just in front of the number nine, who ran into the penalty area before putting the ball past Foster via a deflection off defender Craig Dawson.

Pearson’s substitutions gave the Hornets a way back into the game with just over 10 minutes left on the clock. Holebas sent in a ball from the wing towards Danny Welbeck who was waiting in the centre, but defender Bednarek got there ahead of the striker and turned the ball into his own net.

However, less than three minutes later Ward-Prowse sent a free-kick over the wall and into the net to ensure the three points went back to the south coast.