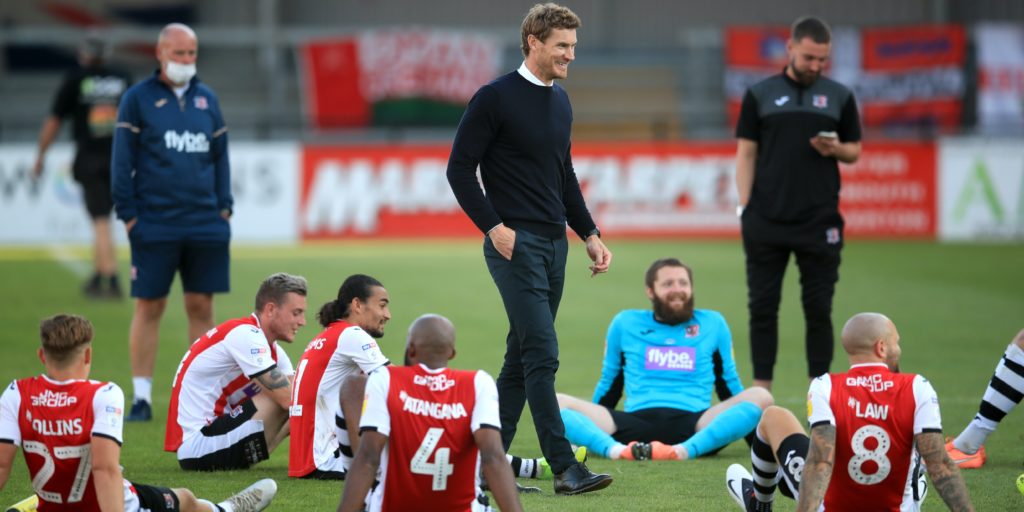 The Grecians take on Northampton for a place in League One.

Matt Taylor insists he has not looked back on the “brutal” memories of Exeter’s recent play-off final failures as he focuses on creating his own history at Wembley.

He was part of Paul Tisdale’s coaching staff when Exeter suffered disappointing defeats to Blackpool in 2017 and Coventry in 2018.

The 38-year-old, who succeeded Tisdale following the loss to the Sky Blues, is determined to be positive and concentrate on the present, rather than attempt to learn from the past.

“We’ve not looked into it too much, to be honest with you,” Taylor said of the play-off final defeats.

“My memory has not gone back to those two occasions where I was involved as a coach because they were negative times in terms of the results we got.

“It’s part and parcel of it that you win and lose in football but those finals certainly hurt us in terms of the way we performed on the day.

“We’re not looking at what’s been in the past, we’re certainly looking forward and we want to make our own history.

“You only really enjoy Wembley if you are successful and no-one really remembers the team who gets beaten. It’s a brutal place to go and lose.”

Exeter are bidding to end an eight-year exile from the third tier.

After twice enduring recent heartbreak at the national stadium, Grecians fans will be unable to attend the behind-closed-doors match because of coronavirus restrictions.

Their presence will be replaced by an army of cardboard cutouts, including celebrity fans such as Coldplay lead singer Chris Martin and actor and comedian Adrian Edmondson.

The Devon club booked their place in the final after Ryan Bowman grabbed an extra-time winner in a gruelling semi-final success over Colchester.

Forward Bowman, who joined the club last summer, wants to make the most of his maiden Wembley appearance but admits the occasion will be tinged with disappointment because of the lack of atmosphere.

“As a professional footballer, you want to play at places like Wembley. Having played 10 years professionally to not get there yet, I can’t wait for it,” said the 28-year-old, who has scored 15 times this season.

“It is a shame your family and friends are not going to be there watching but you know they’re going to be supporting you from home, likewise the fans will be, so you’ve got to put a performance on.

“It does take away (from the experience) a little bit but playing at Wembley in itself is a massive thing and hopefully it can be a successful one.”